SF9 promised us that we’d be seeing different views of their latest title track ‘Now or Never‘ when it reached specific view levels, and they’ve kept their promise (and there is more to come!).

‘Now or Never’ is the title track from their recently released fifth mini-album ‘Sensuous‘, and it’s a track that just gets better with every listen. 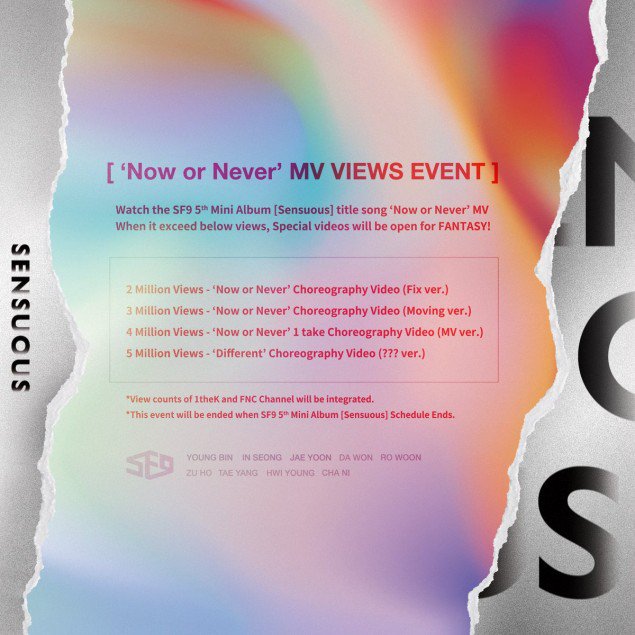 The latest version to be released is actually on the ‘view’ schedule, it’s a behind the scenes film of ‘Now or Never‘.

This clip gives you a chance to check out all the behind the scenes action as they goof around backstage and have fun hanging out with each other.  They’re all business when it comes time to film, and show off the charms that has won fans all over the world.

Check out SF9’s ‘Now or Never’ behind film

The group had earlier dropped the ‘FIX’ version for ‘Now or Never’.  This version was unlocked with the view count for the full music video reached 2million.
The FIX version takes place in an all white rehearsal room with the fixed camera catching all the action as they pull off the mesmerising choreography for the track.

Check out SF9’s ‘FIX’ version of ‘Now or Never’

In yet another version (not on the ‘view’ schedule) the group have released both the special collaboration video for ‘Now or Never’ with 1MILLION Dance Studio and the behind the scenes clip for the collaboration.

The members undertook three (3) special collaboration projects for this release.  This one with 1MILLION Dance Studio, their webtoon and the illustrated dance teaser that were both released earlier.

Which version of ‘Now or Never‘ is your favourite so far?  Which version are you looking forward to unlocking?  Let us know your thoughts in the comments below.

Scroll for more
Tap
9MUSES celebrates their 8th anniversary with a special clip, ‘To. Mine’
DIA is ready to have fun at the beach in latest ‘Woo Woo’ MV
Scroll
Loading Comments...