Jonghyun took to his Twitter to express excitement as he checked on the progress of the recording of the choir performance section of Hallelujah in the US from his studio in Korea. 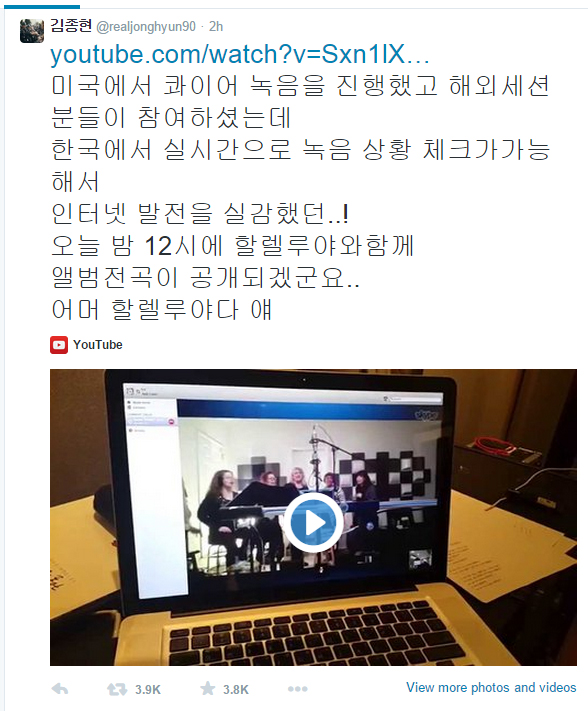 Had a recording with the choir from the USA and though the people from overseas had participated in the session. I was able to check on the progress of the recording real time from Korea though the internet… ! Tonight at 12 am KST Hallalujah, along with full album will be released…

Jonghyun’s album Base has not only sent Shawols and Blingers into fan girl / boy over-drive, but also is getting rave reviews from K-Pop fans in general. Jonghyun has shared a clip of the recording, you can check it out below.

So far Jonghyun has been having an outstanding 2015 as of his music video for Crazy (Guilty Pleasure) featuring Iron blew up on the internet and fan pages .

He also recently completed a music showcase performance of  Deja Boo featuring another KPOP veteran Zion.T. Based on the above video and his performances so far I think it is safe to say that Jonghyun is setting the bar pretty high for the rest of the artists still to comeback and debut this year.

Stay with Officially KMusic for all the latest in Korean music and news.

Scroll for more
Tap
K-EXCLUSIVE: Win 2 Tickets to Sungha Jung Live in Sydney or Melbourne
K-Indie Korner: From The Airport’s “You Could Imagine”
Scroll