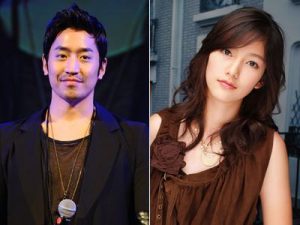 On February 23rd, it was confirmed that Shinhwa’s Eric Mun is dating actress, Na Hye Mi. Eric’s agency, E&J Entertainment confirmed this news by stating that, “The two started out as acquaintances at first and later turned into a couple.”

The pair were first swept up in dating rumors in 2014, but both sides denied this at the time. Fans had speculated the two were in a relationship even after denying the rumors back in 2014. Now that news had come up again, Eric has confirmed that he is dating Na Hye Mi and asks for warm support towards them.

Na Hye Mi made her acting debut in the 2001 movie, ‘Address Unkown,’ and is most known for her role in the MBC sitcom, ‘High Kick!‘ in 2006. She has been active in dramas and moviesthroughout the years and is currently shooting for the new drama, ‘My Sassy Girl.’ Eric debuted as the leader of first generation idol group, Shinhwa in 1998 and has been acting in various dramas and variety shows like ‘Another Oh Hae Young,’ and the reality show, ‘Three Meals A Day: Fishing Village.’ Shinhwa was recently active this past October with their comeback, ‘She Said.’ Since the group’s comeback they have been actively promoting and held their solo concert this past December and January.

Congrats to the happy couple!