A few days ago, SNL Korea came under fire for the actions of some of its female staff members. After the show released a behind-the scenes video of B1A4, on their official Facebook page, fans were in uproar over the group being inappropriately touched. SNL Korea later deleted the video, after it stirred up controversy, and apologized to B1A4 stating:

“We will make note to prevent this kind of inappropriate behavior towards the hosts. We would like to sincerely apologize to B1A4 and their fans once more.” 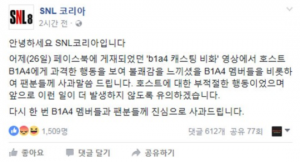 You can watch the clip of B1A4 below:

But the issue did not stop there. A clip of Infinite receiving the same treatment was also uploaded, proving that the incident is a repeating one. SNL Korea then became a trending topic under the hashtag  “SNL Sexual Harassment” (SNL_성추행).

You can watch the clip of Infinite Below:

Following this, rumors spread of SNL Korea cast member, Lee Se Young, leaving the show as she was one of those staff members in question. This was later dispelled and the comedienne uploaded a hand-written apology to Instagram. However, she came under fire as well for only apologizing to B1A4.  Below is a translation of her letter:

“Hello, this is Lee Se Young. I apologize for worrying everyone with my wrongful actions. I personally apologized to each individual member on set, and with this letter, I want to once again apologize to all the fans and B1A4 members. I’ll reflect on my actions time and again so that something like this does not happen again. I sincerely apologize.” 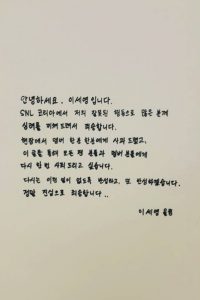 Most recently, fans also uploaded a video of Block B being treated in the same way as the previous two groups. Since then, the issue has escalated even further with this harassment seeming to be a pattern for guests on the show. Fans are also outraged at the ‘celebration’ the staff members appear to have after their actions. 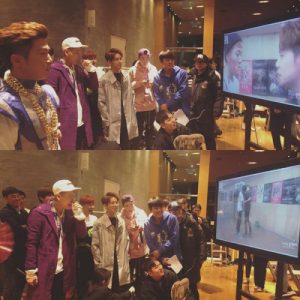 Of the 3 groups, only B1A4 has officially spoken out about the incident. They first addressed the situation at their November 28th showcase for their new studio album, ‘Good Timing‘. Leader, Jinyoung, spoke out first saying:

“Honestly, it happened so suddenly that we didn’t know what to make of the situation. So we watched the video again, and we thought it would make the fans worry a lot. As big as the controversy is, we’re going to power through and work harder on our album.” 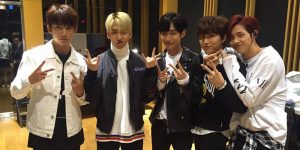 The group then released an official statement, and below is a translation of that statement:

“With our comeback here, it’s regrettable that this issue came up, something that we could never have anticipated. However, we’ve received plenty of apologies from the ‘SNL Korea’ staff and Lee Se Young.

As this is our first comeback in a long time, we want to focus on our promotions. We’ll do our best with our ‘Lie’ promotions. We apologize for making everyone worry, and our agency will also take care so something like this does not happen again.” 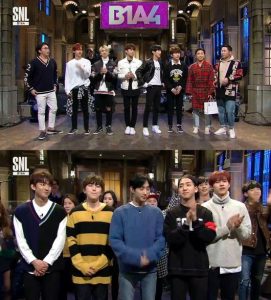 SNL Korea have since issued a lengthy second apology on their official Facebook, which is translated below:

“Hello, this is the staff of SNL.

First and foremost, we offer our sincerest apologies once again to all viewers of ‘SNL Korea’, the fans of B1A4, and all who felt discomfort due to this recent issue. Despite knowing that no amount of excuses can mend the hearts of those who were hurt by this, we still want to apologize for the content of the problematic footage.

The ritual started off as a means to heighten our guest hosts’ morales before heading into the show. We’ve upheld this ritual ever since season 1 without fail, starting with a brief introduction of the host, a welcoming round of applause, the host’s thoughts on their appearance, and a group huddle and ‘fighting’. Most hosts get very nervous because they have little to no experience performing for a live show. Our staff created a welcome for these hosts from the perspectives of fellow celebrities, in order to relieve them of their nerves and empower them with confidence. It was in hopes that we could get them to laugh, cry ‘fighting’ along with us, get rid of the butterflies, and partake in the show at tip top condition.

However, our crew members recently took part in actions which surpassed acceptable boundaries and the severity of their actions caused many to experience discomfort and irritation. We sincerely apologize.

We believe that this issue is not solely Lee Se Young’s fault. We believe that we the staff at ‘SNL Korea’ are at the biggest fault for not being able to catch this problematic occurrence before, as well as for posting a problematic clip on a public platform like Facebook.

We will take this time to reflect on our actions and work hard to ensure such an issue does not occur again. We will return this program into one which meets your expectations. We bow our heads in apology, again.” 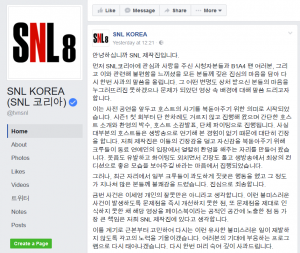 It’s uncertain if Block B will also speak out now that their fans are in uproar too but what’s for certain is that fans have not received SNL Korea’s previous apologies well.

What do you think if this controversy?

Stay with Officially KMusic as we bring you the latest in Korean Entertainment news!

Scroll for more
Tap
HAHA And Oh My Girl Bring A Raggae Twist To The Holidays With ‘White’ Music Video!
Another Star Makes Military Plans As Seo In Guk Talks Enlistment
Scroll