Soyou has released a teaser image ahead of her first solo album release. 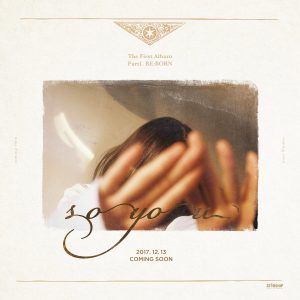 The teaser image shows Soyou hiding from the camera with her hand. Her pre-released track ‘I Still’ featuring Sung Si Kyung was released recently to tease the album. On the date of the album release, Soyou will also greet fans through a showcase. ‘RE:BORN‘ will be released on December 13th.

Are you excited about Soyou‘s comeback? Keep up with her comeback by following our Soyou tag here!

Stay on top of all the K-pop news at Officially Kmusic!

Scroll for more
Tap
Might Mouth to make a mighty December comeback!
Younha announces her soon return with a comeback!
Scroll