Upcoming musical ‘The Last Kiss’ is set to feature an array of famous faces when begins its run in December!

It has been confirmed by their respective agencies that EXO’s Suho, VIXX’s Leo and musical actor Kai (not to be confused with EXO’s Kai) will share the role of Crown Prince Rudolf, while f(x)’s Luna will play Mary Vetsera, Rudolf’s lover. 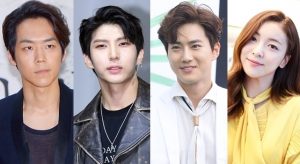 ‘The Last Kiss’ or ‘Rudolf’ as its known around the world, will run from December 14, 2017 to March 11, 2018. The musical features tracks by Frank Wildhorn, and will begin showing at LG Art Centre in Gangnam in Seoul.

We hope the musical is very successful, and wish Suho, Leo, Kai and Luna luck in their new roles!