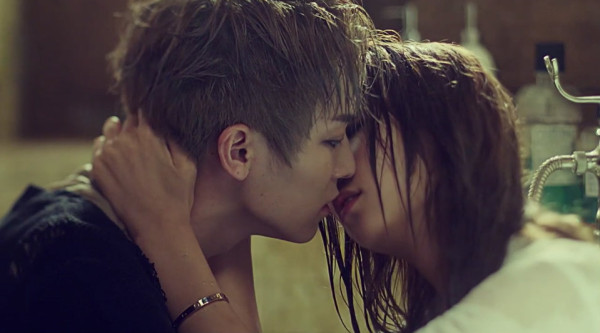 Leader C.A.P explained that the kiss scene was a last minute addition while they were already filming.

In response, DJ Lee Sora asked him, “I heard that C.A.P had an extreme love scene in the music video for Missing. Is this true?”

He replied with, “It wasn’t extreme. The opposite actress was dressed and I was the only one nude so it wasn’t that extreme”, in which he added, “L.Joe was the one who benefited. When he heard that I had a love scene, he was so jealous. Then his kiss scene was added to the video all of a sudden.”

“That scene didn’t exist originally. I think L.Joe talked to the director because he was jealous of my love scene”, causing L. Joe to argue jokingly with him saying that he “had nothing to do with it. I found out about it at the filming site. I didn’t ask the director to add the scene. I’m serious.”

If you haven’t checked it out yet, watch the boys of Teen Top bring back the old school sex appeal in their new music video for “Missing”.