Sunmi has begun teasing for her upcoming comeback, ‘Gashina‘. This will mark her first comeback since her departure from JYP Entertainment. It definitely is quite exciting to see what kind of concept she will come back with. So, check out the teasers below to find out! 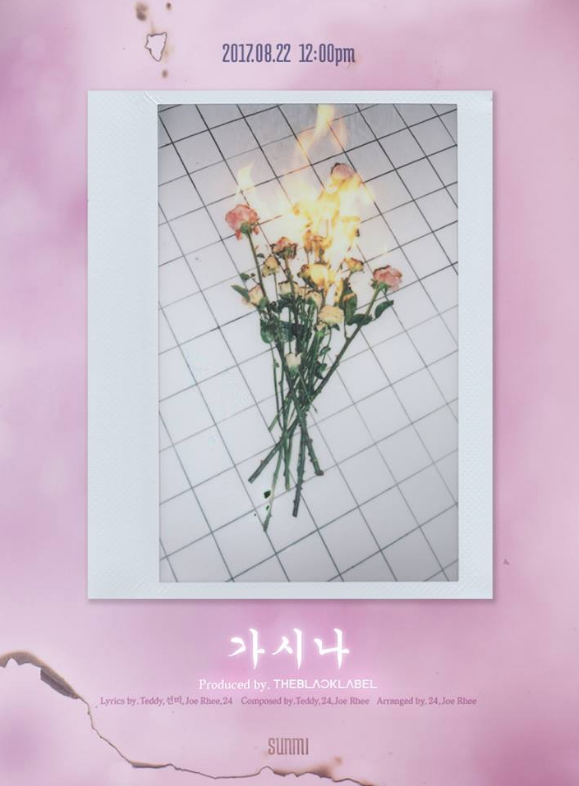 In the first image, it is a bunch of roses that is lit up on fire. It looks like romance has gone wrong! What could have happened? What do you think it is all about? Let us know in the comments below. Meanwhile, in this image teaser, it also revealed a few juicy details! It looks like she will be returning with ‘Gashina‘, a track that was produced by The Black Label. The track was produced by Teddy and Joe Rhee, while the lyrics was written by Teddy, Sunmi, Joe Rhee and 24! Just by listing those involved in this comeback, it surely hypes fans up for a fantastic comeback!

Sunmi has also dropped the first moving teaser. Not much is revealed in this, including no sounds accompanying the video. The only thing seen is a beautiful purple light casting over her face. She has quite a luring face expression on.

Meanwhile, Sunmi will mark her first comeback in two years on August 22nd! Are you excited for her return? let us know in the comments below!