Taeyang and Ailee Duet Stage May Be a Possibility!

Taeyang and Ailee Duet Stage May Be a Possibility!

Ailee appeared on the October 10th broadcast of KBS‘ “Yoo Hee Yeol’s Sketchbook” and during the interview part of the show, the singer was given the opportunity to talk to Big Bang‘s Taeyang. 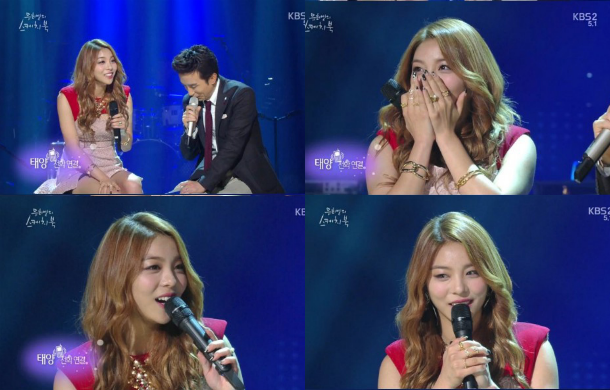 Ailee, who is a big fan of Taeyang, was shocked by the surprise phone conversation.

Yoo Hee Yeol told Taeyang, “Ailee says she loves your music. She really loves your music, but what are your plans for the end of the year?” Taeyang replied with, “I don’t have much else planned other than a concert.”

Asking further questions, Yoo Hee Yeol added, “Can I ask you for a favor? I want to make a stage for you to sing a duet song together with Ailee. What do you think?”

The Big Bang member said in response, “I think that would be awesome”,  while Ailee said, “Of course, I’m totally okay with it. Is that even a question?”

Before the end of the phone call, Taeyang told Ailee that he provided his autographed album through Yoo Hee Yeol with a personalized message saying, “To Ailee! Congratulations on your comeback. I’m a big fan of you!! God Bless!”

You can check out the phone call between Ailee and Taeyang on “Yoo Hee Yeol’s Sketchbook” in the video below!

Ailee proves that just because you’re a celebrity does not mean you can’t still fan girl over your idol. It was so adorable to see her reaction when he sang to her. What do you guys think? Would you like to see Taeyang and Ailee do a collaboration stage together?  The staff here at Officially KMusic all would love to see these two together in pretty much any capacity.  We are HUGE fans of both artists and we unashamedly fangirled over this video.  Let us know what you thought in the comments below!