December 19th is creeping up on us and we’re getting more stills and news on KBS2’s upcoming drama, ‘Hwarang: The Beginning‘. In the latest releases, Park Hyung Sik is showing us a different side to his character, Sam Maek Jong.

While we last saw the ‘faceless king’ as a character who is shrouded in rumors and prefers to travel the land, this time a more sombre side is shown in the latest stills. It’s clear that Sam Maek Jong’s story is going to be a captivating one as we watch him overcome his struggles and ill-fate. 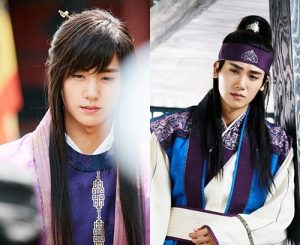 While the drama will air next Monday, there is a planned ‘special episode’ that will precede it’s pilot, on December 16th at 10pm KST. This is unusual for dramas, as they ordinarily air the special episode after the final one. Nevertheless, viewers can expect a little something extra to build up anticipation for the premier.

Are you ready to the see “The Beautiful Knights” in action?

Stay with Officially KMusic as we bring you the latest in Korean drama news!