Teen Top is starting the new year off right with a new album!

Most recently, the six guys of Teen Top released a mini-album in June of 2015 called ‘Natural Born Teen Top’ and promoted the title track ‘Ah-Ah’.  L.Joe, C.A.P, Niel, Chunji, Ricky, and Changjo had a hand in that album and, according to their new tracklist, they had a hand in this new album as well. 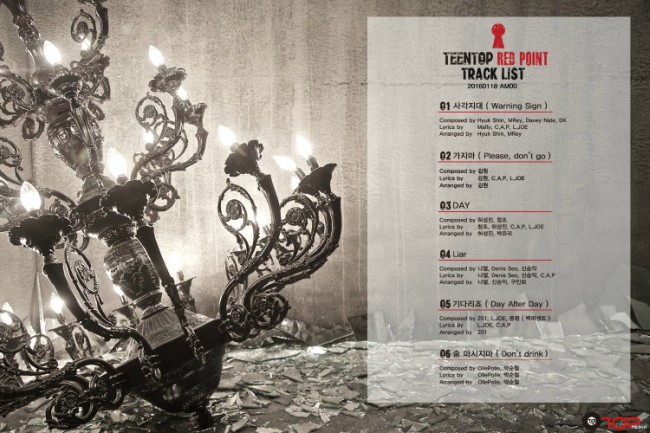 On top of releasing the list of songs, Teen Top has also released their second teaser trailer for the title track, ‘사각지대 (Warning Sign)’. This new song definitely seems much darker and sexier than their previous title, giving the guys a more mature feel for the new year.

‘Red Point’ will be their second studio album; ‘No. 1’ was their first, back in 2013. Teen Top was the first group created under TOP Media back in 2010 and the guys are still going strong. ‘Natural Born Teen Top’ placed within the top twenty spots for Billboard’s World Album and Digital Song list.  This new album will just add to their already long discography and Angels are super excited to see their favourite band having another comeback.

With the release date of January 18 creeping closer, I cannot wait to for this new song to drop. I happen to own all their albums digitally and ‘Natural Born Teen Top’ in a physical form so I am anxious to add this one to my music collection as well. Are you excited for their new comeback? We want to hear your thoughts.