They’re Back! Infinite Is Bloody and Badass In ‘The Eye’ MV

They’re Back! Infinite Is Bloody and Badass In ‘The Eye’ MV

After a year and 3 months Infinite is back and they brought their A-game! In one of the most anticipated comebacks of 2016, Infinite is anything but disappointing. The action packed music video is filled with angst, wonderful acting by L, and some seriously amazing choreography by Hoya.

In a true tone to the last few comebacks Infinite plays up the badass role as seen in ‘Back‘.

L, the main actor of the group, is in a role all too familiar, running and bloodied, from something unseen. The director plays with lighting making the dance scenes in bright light and dark clothes, a stark contrast to their second title track “BTD“. The scenes are all in different places with various band mates all approaching the main character L is portraying. There’s a certain post apocalyptic vibe to the entire music video as well as a sense of defeat. 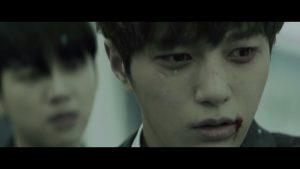 The song itself is a dance track that Inspirits are familiar with, starting slow with a ballad like piano and building up to amazing vocals and heavy violin. The lyrics tell a haunting tale of lost love and the song features no rapping which is a rarity in Kpop but fits perfectly with the song. Instead of rapping Inspirits where surprised to see Dongwoo singing. Rappers Dongwoo and Hoya are both beautiful singers and have been featured singing in various other Infinite songs, but this would be the first without them rapping. The chorus is catchy sung by leader Sunggyu, who has two solo albums. 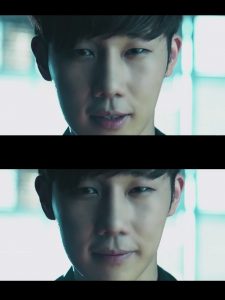 The choreography is perfect. Hoya, the main dancer who is coming off a win on the popular show Hit the Stage, teased the choreo in an earlier V app show. Infinite rarely disappoints in choreography since their famous scorpion dance from ‘BTD’. The dance is haunting and gorgeous showing off various moves and certain swagger. The choreography is also precious and gorgeous with the boys dressed all in black and in traditional Infinite fashion, they all are circled around the member who is singing. 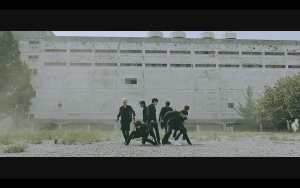 All in all the amazing comeback is filled with exceptional choreography, haunting lyrics, and fantastic acting!

Check out the music video below and look forward to Infinite‘s showcase September 19th at 6am EST on V app and their upcoming stages.