After the surprise release of the teaser photo for TWICE’s comeback and the release of their ‘Cheer Up’ schedule time, they have released the tracklist for their 2nd mini-album, ‘Page Two’.

‘Page Two’ will consist of seven tracks, including the title track, ‘Cheer Up’, ‘Touch Down’, ‘WooHoo’ and ‘I’m Gonna Be A Star’. ‘Cheer Up’ was specially written by Sam Lewis and composed by Black Eyed Pilseung. Also, it is believed that ‘I’m Gonna Be A Star’ could be the survival show’s, Sixteen, introduction and it is the only track on ‘Page Two’ that is only available in physical CD.

It was announced that ‘Page Two’ will be available in a pink or mint colour and includes a 72-photo photobook and poster. Also, there will be a limited edition of ‘Cheer Up’ kit for the first 30,000 people. This kit will include a drawing by member Chaeyoung, a sticker and another version of the power.

Are you excited for TWICE’s return? Remember to stay tuned for the release of more teasers for their comeback. TWICE will be releasing their album, ‘Page Two’ and their music video, ‘Cheer Up’ on the 25th of April! So meanwhile, check out the tracklist of TWICE’s ‘Page Two’ below! 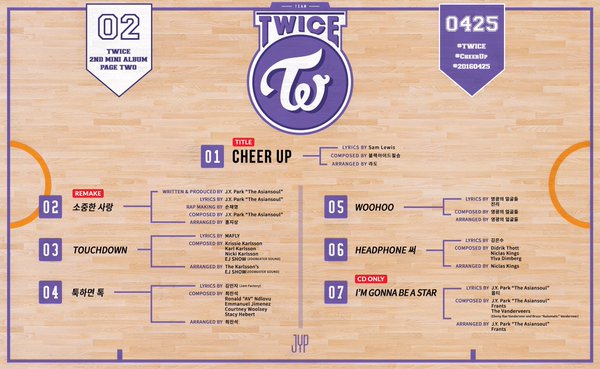 What genre do you think ‘Page Two’ album will be like? Let us know below!