TWICE To Make Their Comeback In May

TWICE To Make Their Comeback In May

TWICE will be making their comeback in May. The girls will be returning with their fourth mini album, ‘Signal‘, where JYP will personally be working on their new track. This will mark their first time working together since their debut. To get fans excited for their comeback, the group has dropped a few image teasers, an album preview and their comeback schedule. Check it out below! 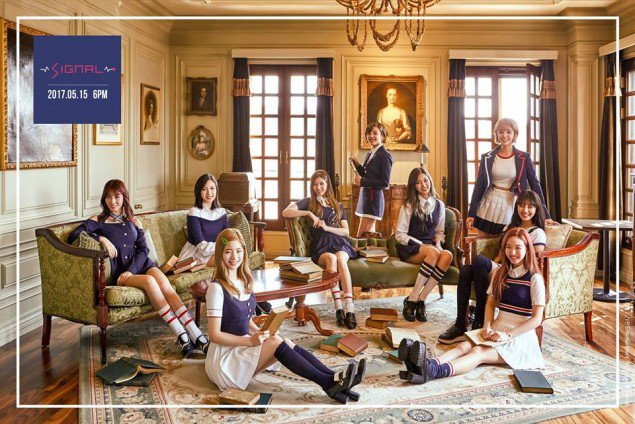 The girls have so far revealed two group images. They are both taken at the same position however with different face expression on. One of the images, all the girls are frowning or looking cute upset. While, the other is a total opposite: they are all smiling brightly towards the camera. The girls are also dressed up nicely with the purple, white and red school outfits. They definitely are rocking the school outfit, looking very gracious in the antique room.

From the comeback schedule, it gives off a spacey, alien gaming theme since there is a UFO floating above and hearts at the bottom corner signalling the amount of lives they have. TWICE will be releasing a signal everything, teasing for their comeback from May 1st to May 14th. However, the schedule highlights May 7th to be a special event and isn’t named accordingly; it has its special name to be ‘Signal Twice‘. It will be exciting to see what the girls will bring on these days! On top of that, the girls will be having a showcase on V Live on May 15th with an ‘Encore Twiceland‘ at Jamsil Indoor Stadium on May 17th and 18th. The girls have a lot prepared, so are you looking forward to each day? Let us know in the comments below!

Meanwhile, TWICE will make their comeback on May 15th. So, check out the schedule and be sure to mark down each day for a TWICE teaser release. Are you looking forward to TWICE’s return? Let us know in the comments below!