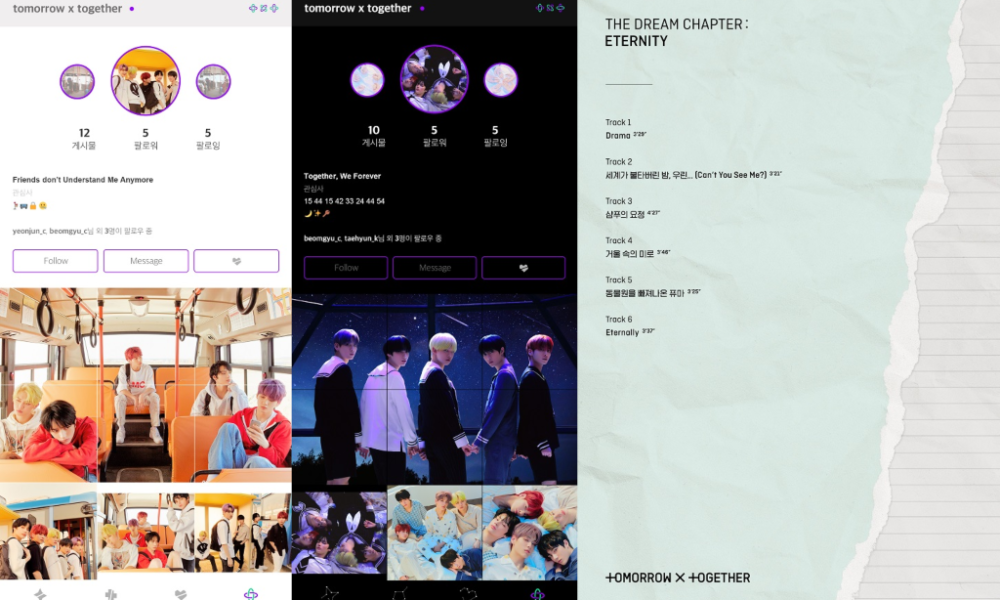 Between May 1st and 4th, TXT released two concept photo teasers for their 2nd mini album, ‘The Dream Chapter: Eternity’. Two days later on the 6th, the group dropped the album’s track list. Check them out below!

Both concept photos show the image of a social media account with the first one being labelled “Port” and the latter, “Starboard”. Each of the photos link to the group’s page where there are many other photos with the images of individual members with their own social media accounts linked to each concept and unique captions, adding to the mystique of their group’s universe. The images express two different vibes with the first being more preppy and bright in style and and the latter being darker with a night sky to match.

Moving on to the track list, the mini album will contain six tracks with the title track yet to be announced. They are as follows:

‘Fairy of Shampoo’ is a remake of a popular 1990’s hit by Light and Salt. Member Yeonjun participated in the rap making for this remake.

This album will mark the conclusion of ‘The Dream Chapter’ album trilogy, so fans are extremely excited for this album and what is to come in the future.

TXT‘s 2nd mini album, ‘The Dream Chapter: Eternity’, will be released on May 18th! How do you feel about TXT‘s upcoming comeback? Let us know in the comments below!