UEE To Officially Leave After School And Is Joining Yuleum Entertainment

UEE To Officially Leave After School And Is Joining Yuleum Entertainment

With UEE‘s contract reaching an end with Pledis Entertainment at the end of this month, she has confirmed her departure from the company and After School. 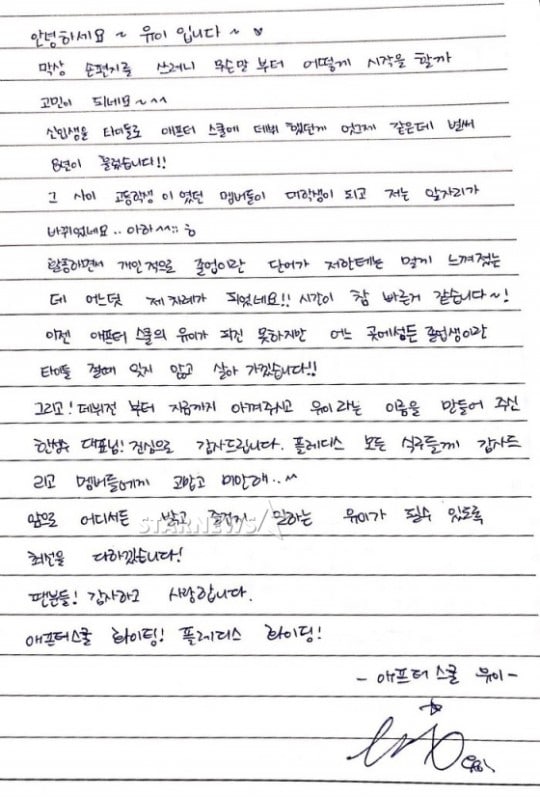 She has taken to the official fancafe to drop her written letter to the fans and her members. She had written “It has been eight years since her debut and it seems like just yesterday that I have debuted with After School. Over the years with After School, my occupation has changed and I believe it is my turn to graduate from After School. I am grateful to all at Pledis Entertainment and I am thankful yet feel quite apologetic to my After School members. I will continue to work hard and continue to show the best side of UEE.”

Pledis has also released a statement saying “We hope UEE achieve amazing things in the future and we will continue to cheer her on.”

Meanwhile, UEE has signed an exclusive contract with Yuleum Entertainment. The company has stated “We will do out best to help UEE show the best side of her. We will support her to become more active in many areas like acting and on variety shows. We hope fans continue to support UEE.” So, be sure to watch on UEE has she marks the end of her chapter with After School and begins her new chapter with Yuluem Entertainment!

Stay tuned to Officially Kmusic to continue to keep you with the latest news in Korea!