People have been trying to collaborate with Tiger JK for as long as we can remember, but it seems that he finally opened his doors.

The legendary hip-hop group MFBTY, Yoon Mirae, TigerJK and Bizzy, are preparing for March comeback,  which comes a year and six months after “The Cure.”

This new album will include a lot of talented artists and one of them is no other that BTS’ amazing leader and rapper, Rap Monster!

Yesterday, the music video director, Lumpens, uploaded a photo of the members of MFBTY and Rap Monster sitting in the studio, and in that way he confirmed this amazing collaboration. 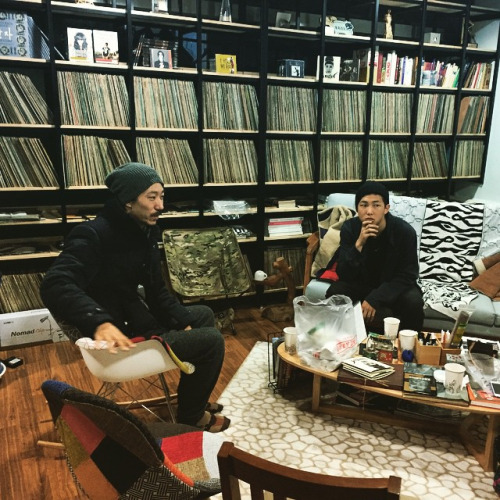 A representative of MFBTY stated following; “Rap Monster will feature on the album. I’ve been told that (MFBTY) has kept a keen eye on the talented industry junior. When they met up for the recording session, they were even more surprised at the level of (Rap Monster’s) rapping skills. Please look forward to their new music.”

As a proud A.R.M.Y am so happy for him, because TigerJK is one of the people who established Korean hip-hop scene, he is a living legend, and for Rap Monster this is a great honor. Also I can really feel how happy he must have felt when the called him for collaboration.

This way he proved that he is one of the best idol rappers out there, he has his own style of rapping that is recognizable and amazing, but coming from underground rap scene we can’t really be surprised, and we, his fans are so proud of him.

Please look forward to this collaboration because this will be epic.

This album is set to be released in mid March and he group is currently picking the title song.

What do you think about this? Please tell us all about it.

Officially KMusic brings you all the latest news from K-Pop, so stay tuned with us.