Part 1 saw various celebs getting creative with their Valentine’s Day greetings, and the celebs in part 2 are no different! Instagram and V-Live proved to be highly useful for the different gifts or messages planned. Check out what PENTAGON, TOPP DOGG, TWICE and more got up to this year!

While he didn’t explicitly state any Valentine’s Day greetings in his caption, his photo spoke for itself with a very meaningful quote. Many of his fans agreed with the quote and made some interpretations for themselves.

PENTAGON uploaded a V-Live video titled “Be Your Valentine“. They started off with comparing their Valentine’s Day style and introduced a special Valentine’s Day project. The project would involve the group traveling, in pairs, to different cities around the country. PENTAGON then played a hilarious game of picking one member to be their Valentine and were paired up if the match worked out. The game ended with a surprise- each of the pairings would not be allowed to choose their city, as originally promised. Instead, the producers had sneakily assigned cities to members, by sticking notes under their chairs.

Concluding the video, PENTAGON told fans to wait for February 18th to see them again. So be sure to look out for V-Live notifications from PENTAGON! 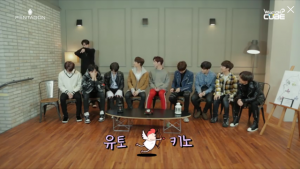 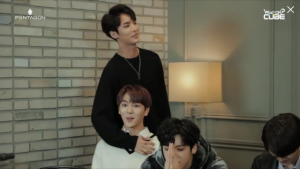 Not only did this group spend their time on V-Live making some chocolates, but they also gifted their fans with news on their comeback! They will be releasing an album titled ‘Sketchbook‘ and have since already released a schedule for it. Be sure to check out the cute video of the boys and their crafty chocolate making skills! 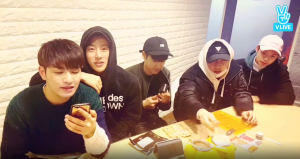 The group went ahead and posted some cute selfies on their Facebook page! Each of the photos contained a heart of some kind which fans found absolutely adorable.

Check out the photo below, and you can find their individual ones on their Facebook page! 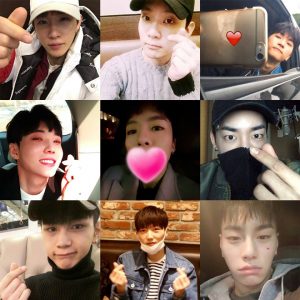 Also taking to V-live, each of the TWICE members sent out their own personal greetings to Once, for the special day! Each of the members presented their fans with a box of chocolates and a sweet and short message. Momo and Dahyun even used their own song lyrics cleverly in their greetings! Check out this playlist with all of the members’ messages. 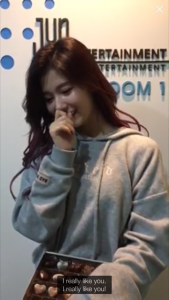 Singles magazine helped Chen with his Valentine’s message this year! EXO’s vocalist will be featured on the March cover of the magazine and so provided them with a cover of Baekhyun and Suzy’s ‘Dream‘. He said it was a song he felt fit the special day and also picked his favorite lines:

“Today, you’re beautiful, just as much as yesterday. No, you’ve become even beautiful today.”

Check out the cover below!

The group’s maknae took to Instagram to show his appreciation for a Valentine’s Day gift that he received.

And this wraps up the recap on what the various K-celebs did this Valentine’s Day! Which of these were your favorites? Let us know in the comments!