Vixx held a Q&A with fans on October 14th. The members received questions from their devoted fans via their SNS accounts. The members showed off their silliness in which one of the members almost dropped the phone while answering questions. 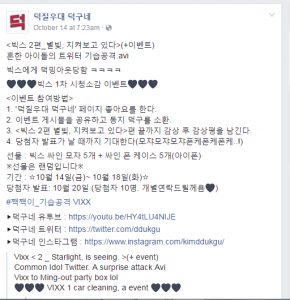 The event was held for fans to receive prizes from the members. Through the ddukgu Facebook page. The boys got into action when a particular fan asked if Leo had his own wireless connection on the subway, in which he answered “no that it is a fake.” Of course the members had a lot of fun answering questions that their fans were curious about.

See the full Q&A below.

What questions would you ask your favorite idol about? For more kpop news and Entertainment follow Officially KMUSIC.

Scroll for more
Tap
GOT7’s Park Jinyoung Officially Becomes Part Of The Cast Of ‘Legend Of The Sea!’
Lee Jong Suk And Han Hyo Joo Are A Sexy Couple For ‘Dazed’ Magazine
Scroll