Wanna One make an ‘Energetic’ debut!

Wanna One make an ‘Energetic’ debut!

Almost two months on from the Produce 101 finale, Wanna One has officially debuted!

Wanna One, the eleven member group formed through the second season of survival show Produce 101, have finally made their debut! Earlier this week the group revealed that ‘Energetic‘ would be their debut song, as voted by their fans, Wannables. The track was produced by Pentagon member Hui, who also helped produce ‘Never‘ – one of the most popular tracks from Produce 101‘s concept evaluations. Check out the music video for ‘Energetic‘ below!

‘Energetic‘ starts off with a relaxing piano intro which is complemented by the group’s choreography and smooth vocals. As the song progresses towards the chorus, synthesizers and percussion are layered to build the track’s intensity. The chorus itself has a distinctive EDM style, ensuring that ‘Energetic‘ will be be a club favourite. In addition to the high quality singing and impressive dancing ability exhibited by all members of Wanna One, ‘Energetic‘ is rounded out by two cool rap breaks, meaning that all eleven members are given time to show off their strengths! 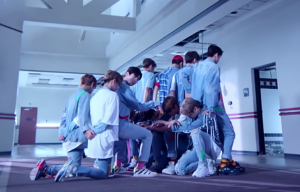 The music video for ‘Energetic‘ is a tale of two concepts. It showcases two vastly separate aesthetic styles, contrasting fun, pastel scenes with more intense scenes filmed with darker colours. This allows the members of Wanna One to show both their cute, fresh side alongside a sexier, more charismatic image.

Wanna One‘s debut has been highly anticipated, especially by fans who watched the members progress through Produce 101. Two of the group’s members have debuted previously, with Sungwoon also being a member of HOTSHOT and Minhyun being a member of NU’EST. All eleven members certainly worked hard to claim their spots in the group, and have continued to work hard in order to make their debut! What do you think of Wanna One‘s debut track ‘Energetic‘?