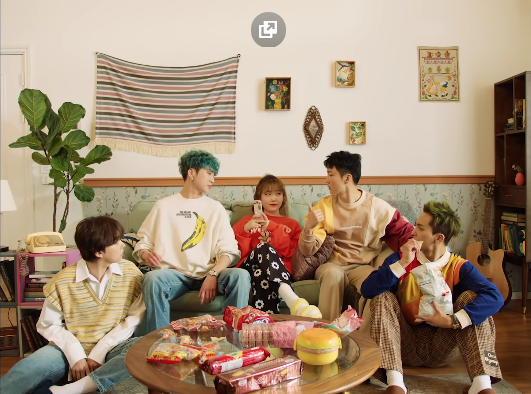 On March 26th, WINNER released the MV for their pre-release single, ‘Hold’ off their 3rd full album, ‘Remember’. Check them out below!

The song’s lyrics describe the thoughts a man has when being in a relationship with a woman, noticing her expression and cutely waiting for her confession. The song was written by member Song Mino and composed by him and YG Entertainment‘s The Black Label producer, R.Tee.

The MV itself is like a family sitcom featuring the WINNER members being the overprotective brothers towards AKMU‘s Suhyun. We see the members try and grab her phone to see who’s she’s texting to multiple failures. But, they all band together, and successfully find the guy she’s talking to. We get to see the members then “approve” men coming into the house and surprise them at the end of the MV when the couple try to kiss.

There is a cute choreography to the catchy chorus too. WINNER created the ‘Ddeum Challenge’ where fans are covering the dance found in the MV and the group has uploaded a tutorial for it too.

Earlier, member Jinwoo announced his military enlistment will be dated for April 2nd. WINNER’s 3rd full album, will be released on April 9th.

How do you feel about ‘Hold’? Let us know in the comments below!