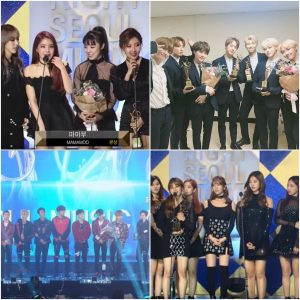 On January 19th the 26th Seoul Music Awards took place and was a night full of amazing performances and exciting awards!

The Seoul Music Awards is an annual awards ceremony that recognizes the most outstanding artists in the Korean entertainment industry. The winners are determined by various factors. The voting system includes fan votes (20% of total), Sports Seoul‘s popularity poll (10% of total), digital downloads and album sales (40% of total), and judge scores (30% of total).

There were quite a few big winners at the event. This year’s Bonsang (Main prize) awards went to BTS, EXO, Got7, MAMAMOO, Red Velvet, Seventeen, VIXX, Zico, G-Friend, Taeyon, TWICE, and Sech Kies.

The New Artist/Rookie of the Year Award went to BLACKPINK, NCT 127, and I.O.I.

The Best Digital Song Award went to TWICE for their widely popular track, ‘Cheer Up.’

EXO snagged the Daesang (Grand Prize) award for the fourth consecutive year in a row. They also won the Fandom School Award, and ended up with a total of 3 awards for the night.

OST Award: Gummy ‘You Are My Everything’ From ‘Descendants of the Sun’

Digital Song of the Year: TWICE ‘Cheer Up’

Record of the Year: BTS ‘Wings’

Congratulations to all the winners of the 26th annual Seoul Music Awards!

Who was your favorite performance or acceptance speech of the night? Let us know in the comments below!