WINNER to play the tourist in travel TV show!

Mino voiced his wish for WINNER to appear on ‘Youth Over Flowers‘, and the production team made it happen! 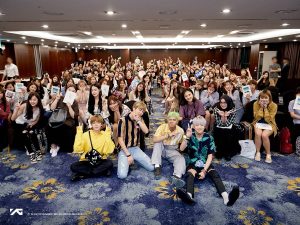 The travel-reality show ‘Youth Over Flowers‘ sees guest stars “kidnapped” and taken to a mystery destination with minimal belongings to see how they adapt to their situation. Previous incarnations of the program have taken guests to destinations such as Peru and Iceland! WINNER reportedly found out about being cast on the show in advance, and started carrying food and survival kits around with them to try and prevent being caught unawares! In fact, WINNER were so well prepared that the ‘Youth Over Flowers‘ production team had to pretend that the show’s producer was taking a holiday in order to get the group to let their guard down enough to catch them out!

WINNER‘s ‘Youth Over Flowers‘ series was filmed in Australia, with the group spending at least some of that time in the city of Perth! WINNER spent seven days filming in Australia before flying back to South Korea in mid-October. Eagle-eyed WINNER fans in Perth saw the members around the city throughout the week, with the group even spotted shopping in a Target store.

WINNER have also shared the broadcast date of the first episode of their ‘Youth Over Flowers‘ series!

Check out their super cute teaser below!

The first episode of WINNER‘s ‘Youth Over Flowers‘ will air at 10:50PM KST on November 7! Are you excited to see the boys take on Australia?

Scroll for more
Tap
Are you ready for ‘The Unit’?
Check out ‘Master Key’s sixth episode lineup!
Scroll