The rookie quartet has made their first comeback!

After making their debut in October last year, HIGHTEEN have returned with their new single ‘Would You‘! Check out the music video below:

‘Would You‘ is a relaxing track which invites the listener to sit back and unwind whilst letting the sweet voices of HIGHTEEN‘s members wash over them. A laid-back atmosphere is created through the use of a melodious vocal line that is not overpowered by the instrumental backing. The instrumental itself is consists mostly of bright synth sounds, and an acoustic guitar is used to create a relaxing mood. 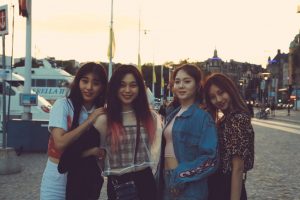 HIGHTEEN shot their music video in Sweden, and so it features clips of the group strolling the streets of Stockholm. The four members all wear casual outfits, which adds to the relaxing nature of the song. In addition to this the music video is shot almost exclusively using a filter that softens natural light. This makes it easier for the viewer to feel at ease whilst watching the clip as it is not harsh on the eyes.

HIGHTEEN debuted under Illusion Entertainment in October 2016 with their title track ‘BOOM BOOM CLAP‘. ‘Would You‘ shows the group’s ability to pursue a more sedate concept, in contrast with their high energy, super cute debut song. What do you think of HIGHTEEN‘s comeback?

Follow Officially Kmusic for the latest news in KPop!