Zico And Seolhyun Confirm Break Up!

Zico And Seolhyun Confirm Break Up!

Block B member Zico and AOA’s Seolhyun have called it quits. After dating for six months both of their agencies confirmed the break up. Seolhyun’s agency FNC Entertainment releasing this statement:

“The attention toward their relationship was too overwhelming, and they eventually drifted apart, leading to a break-up”.

“It’s true that the two have recently broken up. The reason for their breakup is unknown, and is a personal matter”.

It came as a shock when the news broke out. Fans have other opinions however. They have been taking to social media to express these opinions, leaving one fan to tweet: 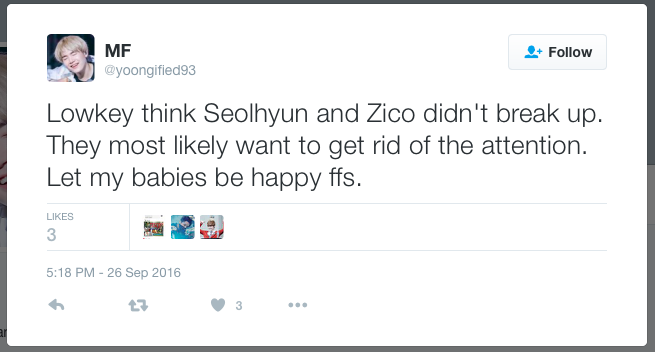 The reason behind the break up? The couple felt scrutinized by their every move, having the media reporting anything the two did. They apparently grew apart due to this, giving the decision to break off the relationship.

What were your first reactions over this news? Let us know in the comments below!

To keep up with all the latest K-Entertainment news, follow Officially KMUSIC!