‘KPOP ALL NIGHT’ With Kidoh and Other Special Performers

‘KPOP ALL NIGHT’ With Kidoh and Other Special Performers

Yet another ‘KPOP ALL NIGHT’ is hitting the towns again, and this time with no other than Kidoh, a past member of Topp Dogg! He is going to perform with other special performers, so stay tuned for more updates!

Kidoh is a rapper, composer, songwriter, and producer. His initial dream was to be a music producer only, but he was approached by an agency and was offered the chance to be a member of a K-Pop group. He previously trained with BTS, but left in 2012 on good terms. Kidoh was the first Topp Dogg member to release a solo album called ‘1st EP Album.’ One of the songs on this album ‘Taxi on the Phone‘ has more than 200K views on YouTube.

The first lucky city that has been announced to host this event filled with the best of K-Pop is Dallas! We shall expect two more cities to be added to this special tour with Kidoh.

The tickets will be available in three categories: General, Gold VIP and Platinum VIP. General ticket buyers will have a basic access to the venue. 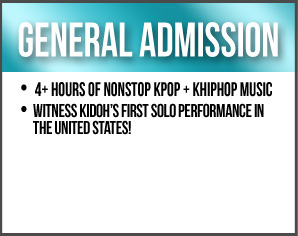 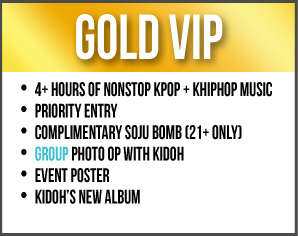 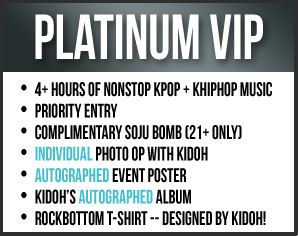 Don´t be worried that the packages will be out of reach for you! The prices will be kept under $150. Don´t miss this opportunity to be there for Kidoh´s first solo performance in the U.S.!

Mark December 16~18, 2016, in your calendars for this ‘KPOP ALL NIGHT’ tour, and stay tuned to Officially KMusic for more information and updates about this and other events along with our upcoming coverage from this event!! Check our calendar to see what other K-Pop events are coming to you!