The new year has to be good when it starts with CL!

The self-proclaimed ‘Baddest Female‘ and former 2NE1 leader shared a post on her personal Instagram account on January 1 in which she expressed her desire to start 2018 with a gift to her fans. 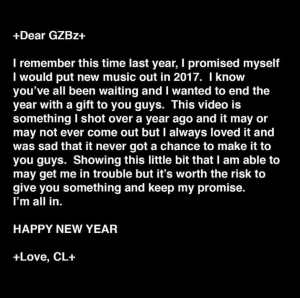 Immediately after posting the above message, CL shared another post containing two clips from an unreleased music video. Check them out below!

Even though CL was only able to share a very small taste of what she has been working on in recent years, this tiny tidbit has got GZBs around the world excited at the thought of a CL comeback. The short clips contain the chorus of a song seemingly recorded entirely in English. The unreleased house track showcases CL‘s vocal ability in a very different way to many of her previous songs which played into her confident, bad-ass image. With many of the tropical house elements that were highly popular in 2017, it is likely that this song would have been a hit for CL had it been released.

Hopefully CL‘s decision to share these clips with her fans doesn’t get her in too much trouble! We’re ‘All In‘ for a CL comeback in 2018!