Say goodbye to Jinyoung, Jisoo and Doyoung on ‘Inkigayo’

Say goodbye to Jinyoung, Jisoo and Doyoung on ‘Inkigayo’

GOT7’s Jinyoung, BLACKPINK’s Jisoo and NCT’s Doyoung recently revealed that they will no longer be MCs on SBS’s ‘Inkigayo.’

The popular band members announced their departure from the show on the Feburary 4th episode, following their announcement of the top artist of the week.

The trio first began their host duties a year ago. While their replacements have not yet been announced, they sure have a lot to live up to! 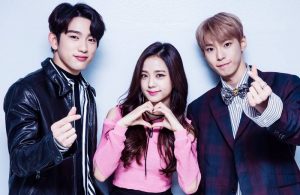 Doyoung thanked his fellow co-hosts and the hardworking staff for taking care of him, the youngest member, and promised to come back with a new and better image. Jisoo also thanked her fellow hosts (the trio is called JinJiDo), and the fans for cheering them on, and promised that BLACKPINK will show more of themselves soon.

Jinyoung thanked the viewers for being with them for a year, and also gave a shout out to ‘Inkigayo‘ staff.

“I was sad that the 1 year anniversary of JinJiDo was our last day, but I’m happy we could stay for a year. Thank you to PD Ji Moon Jo who led JinJiDo very well. ”

Jisoo then thanked several staff by name, and the camera directors who were very supportive of JinJiDo.

“Thank you to BLINKS who came from afar even when the weather was bad. I love you, you always give me strength. I will return as BLACKPINK‘s Jisoo, please look forward to it.”

‘Inkigayo’ is a Korean music program that airs on SBS every Sunday. It crowns the most top artist and song of the week, and often features stage performances by popular artists.

Who do you think should be an MC next on ‘Inkigayo?’