An American Review: ‘Train To Busan’

An American Review: ‘Train To Busan’

Zombies have been all the rave lately. Here in the United States, we have so many zombie themed shows and films, it is hard to not find something zombie themed. From The Walking Dead, to its spinoff Fear The Walking Dead, zombie shows are a dime a dozen. Some would even say the concept is getting boring, to the point of redundancy.

When I first heard about ‘Train To Busan‘ I was admittedly curious. I love international films, so I was excited to see how an Eastern zombie film would compare to what I have seen from the West. I can honestly say, I was beyond impressed. To try my best to avoid spoilers, I will focus on the acting, and my overall opinion of the film. I will not be revealing any specifics to ruin the film for those who have yet to see it.

I would like to start off with the main focus of the film: the zombie. Zombie films have a tendency to be slow, building up to something the audience predicted. This repeated scene builder is what has turned me away from the zombie fad lately. ‘Train To Busan‘ quickly broke me out of that. The zombies are not the typical kind. The slow, easy to get away from, zombie American television loves to write about. These zombies were fast, and reacted to sound rather than pure sight. These zombies reminded me of a mix of ‘World War Z‘ and ‘28 Days Later‘ and the zombies in these films. They are fast, smart enough to climb but not smart enough to wield a weapon, and they have a short time of cognizance before turning. 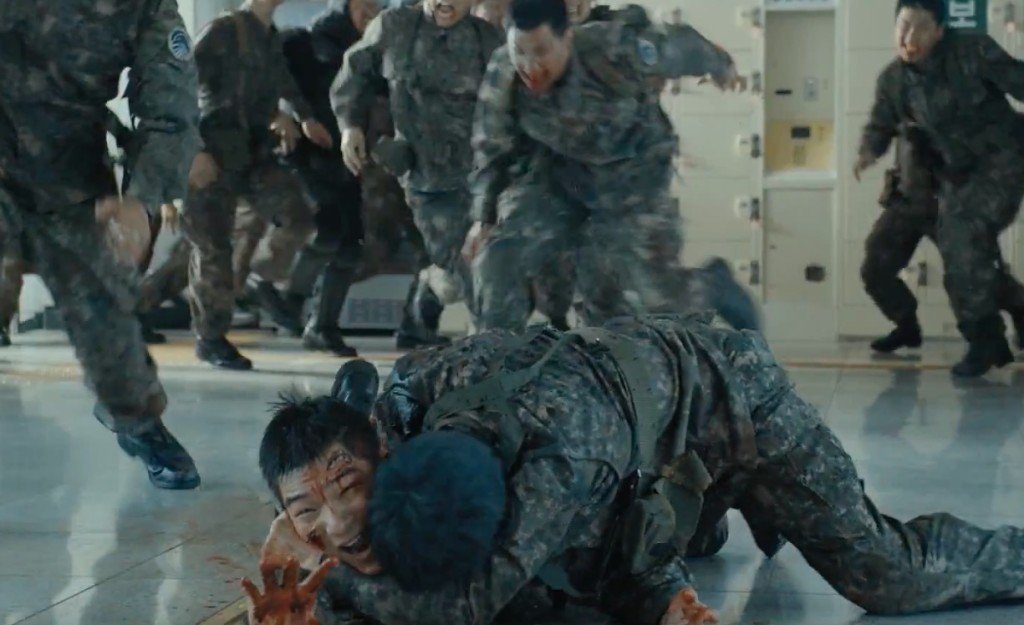 This type of zombie is pivotal for a good film. It is action packed enough to keep one engaged, and it is easy to make things unpredictable. ‘Train To Busan‘ used this type of zombie to their advantage, giving the audience an action packed film. Critics of all things zombies should be overly satisfied with how they are portrayed in this film.

Now, for the thing that impressed me the most, the actors. The film may revolve around Yoo Gong and his daughter Su-an played by Kim Soo-Ahn, but Gong was not the hero. However, he does have a major character development throughout the film, and a much needed one at that. The hero role was shared by many in the film, but the major one was character Sang Hwa.

Sang Hwa played by Ma Dong-seok was the real hero in the film. He is introduced rather early in the film, first appearing to Su-an. Him and his very pregnant wife become two characters that make an impact on the audience, both having incredible endurance and survival strength. Sang Hwa goes out of his way to fight the zombies, protecting everyone around him, even Yoo Gong‘s character, who is rather disliked by Sang. He was also the source of comedic relief, in times when comedy was needed the most. 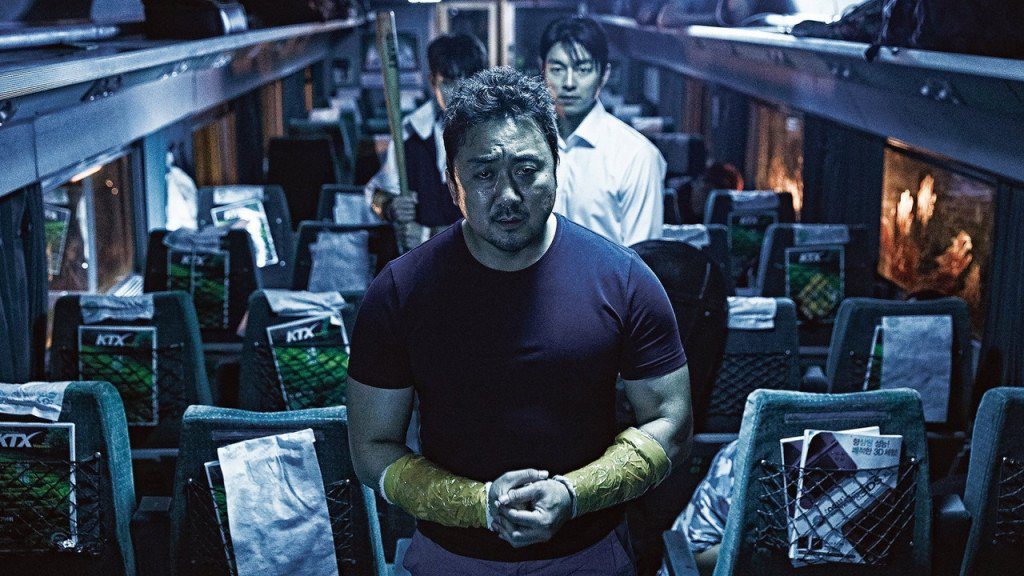 The real star however, and by far my favorite character, was Su-an herself. The entire film is in real time, and that real time happens all on this poor girls birthday. All she wanted as a present was to see her mom, who lives in Busan. This is why her and her father are on the train to begin with. The actress, Kim Soo-Ahn channeled a level of emotion in her acting that actors twenty years her senior have trouble doing. At only ten years old, this wonderful spectacle of acting was the cherry on top to this wonderful movie. I have hopes that this film will be considered in the list for the Academy Awards as a nominee, and I hope Kim Soo-Ahn is nominated for an Oscar. Her acting was spectacular, and she deserves every award to come her way. 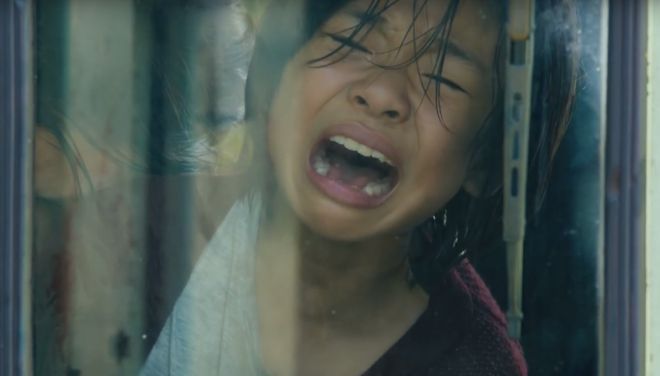 Father, Seok-Woo, played by Gong Yoo, is a static character in my opinion. Even though he does break out of his ways, overcoming his selfishness, not a lot happens with him. The workaholic father often misses out on his daughter’s pivotal life achievements, and the drastic turn of events break Seok-Woo out of his old ways. Thanks to the help of his daughter, and her extremely caring mind, Seok-Woo has a revelation drawing his relationship with his daughter closer than ever before.

He softens up, becoming aware of the people around him, and realizing that they too are human like him. While this character growth makes the static character title wrong (by definition) his character was not the major player in the film. I will not reveal any spoilers, but, his fate is tested, and with this he makes the best decision for his daughter. This is what made me change my mind about him as a character, and he moved up a spot from boring to somewhat interesting. 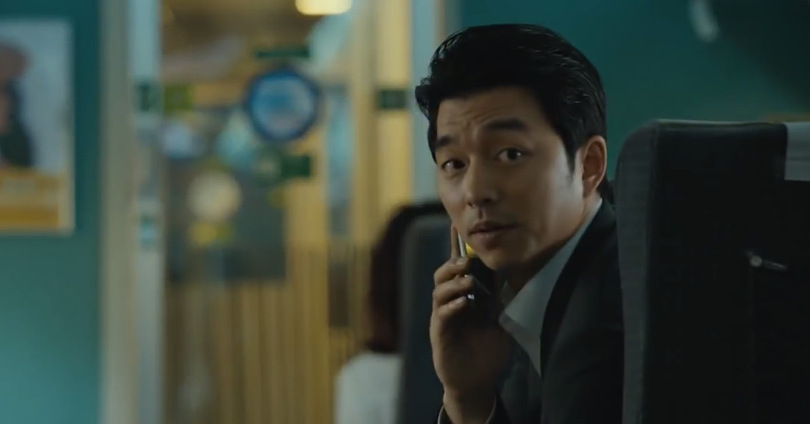 The pregnant wife to Sang Hwa was also a major character as well. Sung-Gyeong, played by Jung Yu-Mi, was a character pivotal to Su-an. She quickly became her motherly figure when chaos broke out on the train. These two not only ended up taking care of each other, but became a major duo during the action packed scenes. For a very pregnant woman, Sung-Gyeong faced all odds, surviving hordes of zombies and massive explosions. All doing this while clinging onto Su-an, protecting her like she was her own daughter. 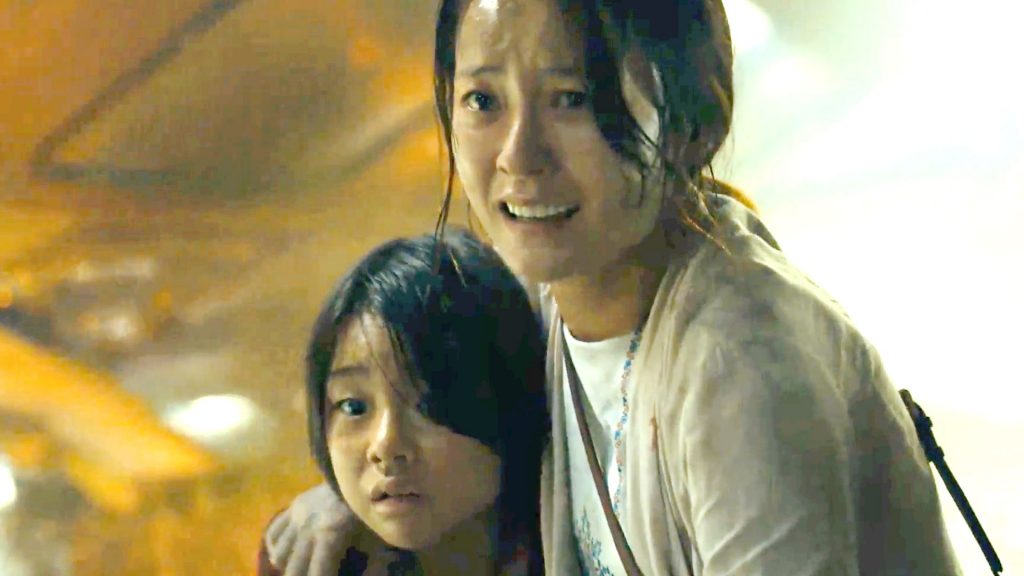 With the news of a confirmed sequel, I am excited to see where the story will continue. With how the film ended, I really hope to see more of Su-an, and her development as a character. I would also like to see Sung-Gyeong have her baby, and see where that story line goes as well.

In conclusion, I believe this is an Academy Award nominee. This film deserves the Academy Award for Foreign Language Film. Kim Soo-Ahn also deserves recognition for her amazing talent at such a young age. Compared to her elders in this film, she was by far the best and most believable. She was able to make me feel the emotion the character was feeling, and that is a very had thing to do at such a young age.

I give this film a ten out of ten with extremely high recommendations. If you are one of the ones who are tired of the zombie films, this one will change your mind.

What are your opinions of the film? Let us know in the comments below!

For all of the latest K-Entertainment news, follow Officially KMUSIC!

Scroll for more
Tap
BTOB Release Photos From Behind the Scenes of ‘Stand By My Side’!
VIXX’s Ravi Has A Girlfriend: And She Is Gorgeous!
Scroll