MC’s Jung Hyung Don and Defconn of MBC every1’s Weekly Idol decided that it was absolutely necessary to inspect the bodies of B.A.P.

B.A.P appeared as guests on the idol-friendly show to promote their new single “One Shot”.

After going through all of Weekly Idol’s mandatory dance practice, the MCs remembered that B.A.P promised to show their abs if the group won rookie awards.

As B.A.P won several awards, the MCs demanded that the group to keep their promise. They began to check around to see which member had the best abs. In the end, the MCs decided that only Bang Yong Guk had tight abs and chose him as the Ab rep.

As for Zelo, Jung Hyung Don and Defconn called his “the baby belly” and prevented him from exposing himself on camera. “A celebrity’s body is wealth,” shared by Jung Hyung Don, before telling them about the importance of keeping a nice body.

B.A.P’s injured member, Himchan, wasn’t able to join the group in their visit in Weekly Idol.

The episode will be aired on March 6th. 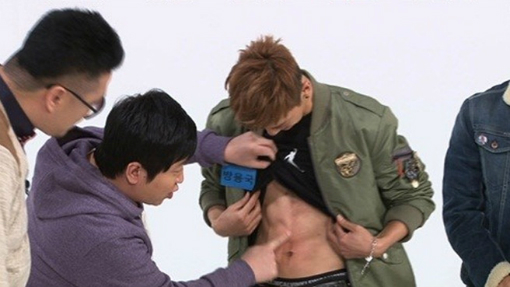