Prepare For The New Beginning; B.A.P Is Back!

Prepare For The New Beginning; B.A.P Is Back!

B.A.P is back! We the fans were not sure if we would ever hear that phrase again. But like any good Baby or K-Pop fan we never gave up hope.

The wait is over and the day has finally arrived. B.A.P has made another step towards their long-awaited comeback; with a comeback showcase via their official V channel. Which many of us here at KMusic believe to be one of the entire season.

The show started with a look at the “green ocean” as fans waited for the guys to take the stage. ‘Warrior‘ was the opening number which seemed fitting as it was B.A.P debut track. Then the group performed a crowd favorite ‘No Mercy.’ Next dance machine Jongup, made everyone scream with a high energy solo dance breakdown. Then the members come together with ‘Excuse Me.’

The performance from start to finish was strong, fabulous, amazing and a whole other list of adjectives. But you cannot expect anything less from this group. They seemed energetic and revitalized on this their first stage after a considerable period away, and proved there won’t be any mercy, that they are really back!

The next was the moment that Babies’ had been longing for – the official meeting of the group. It was indeed an emotional moment for both fans and the members. The honest smiles and happiness filled faces of the members, quenched hearts of fans that were thirsty for B.A.P for so long. They were happy to be back, to being able to be on the stage again for fans. They took a moment to talk to the fans. They spoke of the time they spent travelling, and with their families and friends during the break.

Leader Bang Yongguk, explained the inspiration for the album, ‘Matrix‘. Which is the time they were away which they referred as a “break.” But in a moment of honesty and candor that is not often seen in the entertainment industry which he called was the most “significant” and the “difficult” time for the group. He also said that this album is their story, also the track, ‘Take You There,’ was specially written for fans. He touched all fan hearts with endless warmth stating, “We missed you! It is great to see you again!” Followed by greetings and more heartfelt words from the remaining  members.

After, they offered the insight of the album. They performed songs off their upcoming album starting with a live performance of ‘Young, Wild, And Free.’ We then got our first look into the video of the titled track ‘Young, Wild and Free’, followed by ‘Blind‘ and ‘Take You There‘ also off the ‘MATRIX’ album. This album which a collection of various styles and sounds of music. Promises to be overwhelming and completely satisfying. The album was produced by Yongguk himself.

The official release of the music video ‘Young, Wild and Free’ is scheduled to be released today midnight (KST). Make sure you check in here for our review of the same.

They took another break, this time not only to greet Babies with them, but also the rest around the world. Yong-guk greeted Korean fans, whilst Himchan greeted and spoke to English speaking fans, Youngjae to Chinese fans, Jongup to Thai fans and lastly, Zelo greeted the Spanish fans.

The next to be in the performance was the track ‘Be Happy‘, which was completed dedicated to fans. It was obviously a happy track both in sound and choreography.

Group then left the stage. Fans in the venue and around the world joined in the chant “We Are Always on Your Side!”

Encore time! Kicking off with ‘1004 (Angel),’ members took some moments to speaking of how they won first place for this song, and so how it holds a special place in the hearts of all member. Not just that, they announce some good news. They will be holding a solo concert in Seoul, ‘Live On Earth,’  in February 2016, and there will be another release of a mini album at the same time, bring some good news to the  hearts of international fans. The members then added “Yongguk is exhausted but keeps working on new song.” Yongguk and the rest of the members again gave the fans smile.

Finally, it was reaching the end with the song, ‘With You,’ which they sang during difficult times according to Yongguk. The entire mood reached a whole new level when members could not sing further due to unstoppable tears. But they were not crying alone but the fans cried with them, not only who were there, but all who were with them from around the world broke. As I write this too, still, my heart is heavy and I’m forcing my tears in. 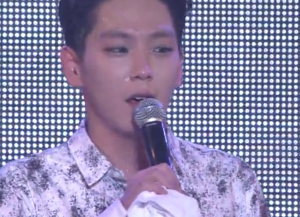 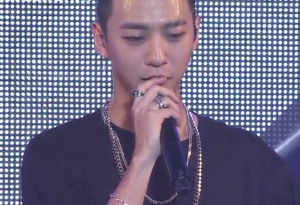 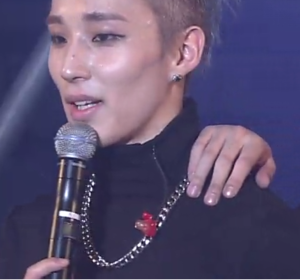 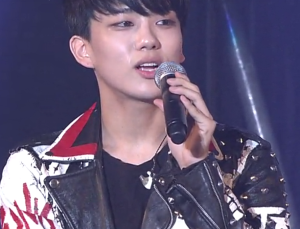 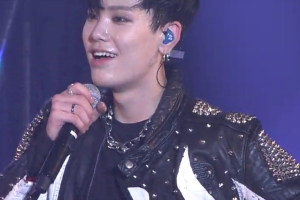 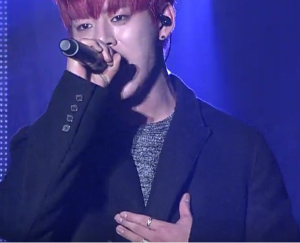 It is indeed wonderful to have them back on stage, having a great time again. Although it was a rough break, it is good that they got the chance to reset and recharge. B.A.P, we missed you! We were worried that we may never see you as a group. But our hopes never died. We never left your side. It’s wonderful to be together with B.A.P, sooner than expected, and it’s good to see they are as happy and strong then as they have ever been.

These handsome Motokies  from another world rose again to be with us, ready to walk an endless road with us. Let’s wait for more updates on their future activities.

Stay with Officially KMusic for all the latest in Korean music and news.