BewhY is back with ‘The Blind Star’!

BewhY is back with ‘The Blind Star’!

His second full album contains eleven tracks, and features three collaborations with artists such as Dok2, Gaeko and C Jamm. ‘My Star‘ is BewhY‘s title track from his new album. Listen to the official audio below!

BewhY wrote the lyrics to ‘My Star‘ and composed the track in tandem with GRAY.  Thanks to BewhY‘s relaxing voice, ‘My Star‘ is a mellow track that would provide the perfect soundtrack to chill out to. It features an interesting assortment of instruments, using brass instruments and a snare drum in the intro, but then paring the accompaniment back to just an electric guitar at the start of the verse. The lyrics are just as calming as the music, as BewhY asks his ‘star’ to trust his love for her. 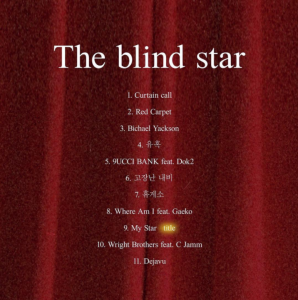 In conjunction with the release of ‘My Star‘, BewhY also released the official audio for a number of other tracks on ‘The blind star‘. Listen to them below!

BewhY won ‘Show Me the Money 5‘ in 2016, and has been releasing singles and collaborated with other artists since 2014. His first studio album ‘Time Travel‘ came out in 2015. Let us know what you think of BewhY‘s new album ‘The blind star‘, as well as its title track ‘My Star‘!