The artists of YG Entertainment recently found time in their super busy schedule to donate. Big Bang’s Daesung, Yoo In Na and Sean donated 30 million won to the Purme Foundation.

On February 20th, Sean visited the Purme Foundation in Seoul and donated part of the proceeds from the “Meet Mr. Bones” project by cosmetics brand, Kiehl′s. Daesung, Yoo In Na, and Sean personally participated in the designing of special edition cosmetics. This project began on June 29, 2012.

The proceeds were donated under the name of YG WITH. It aims to help build a rehabilitation hospital for children.

Sean, as the ambassador of the Purme Foundation, also promotes the “10,000 Won Miracle Project”, asking donors to give 10,000 won a day for an entire year. Big Bang, Psy, 2NE1, Se7en, Epik High, Gummy, Jinusean, Baek Ji Yeon, and Park Chan Ho are some of the artists who are showing their support to the project. 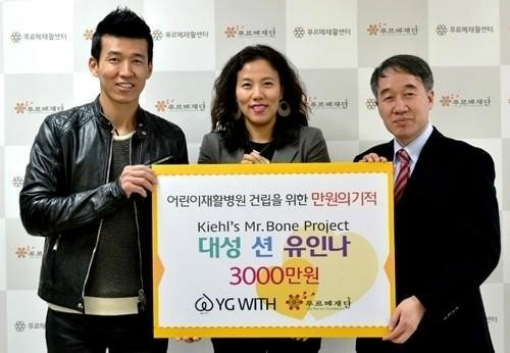