BIGBANG Becomes ‘The Best Artist From The World’!

BIGBANG Becomes ‘The Best Artist From The World’!

BIGBANG won the award for ‘The Best Artist From The World’ at the ‘2016 Italian MTV Awards’ on 19th June!

The ceremony was held in Florence, Italy. The group made this victory while going against many top international artists such as Avril Lavigne, Ariana Grande, The Kolors and more. This is the first time a Korean group has received the title at an music awards show in Italy. Not only for VIPs (BIGBANG’s fan club), but it is indeed an exciting news for all the Korean music fans around the world.

The group is celebrating their 10th anniversary soon. Looking back at the journey of 10 years, BIGBANG is one of the groups who had a successful way from the start. Since the very beginning, the group has delivered incredible music, with extraordinary concepts and variety satisfying those who love them in every way, despite the hardships and obstacles they came across. The uniqueness, exclusive charisma, and individuality of each member does not need any explanations; BIGBANG is loved globally and this award is one of the great proof to confirm it.

The members thanked their fans on their Instagram accounts for the love and support given toward their success. 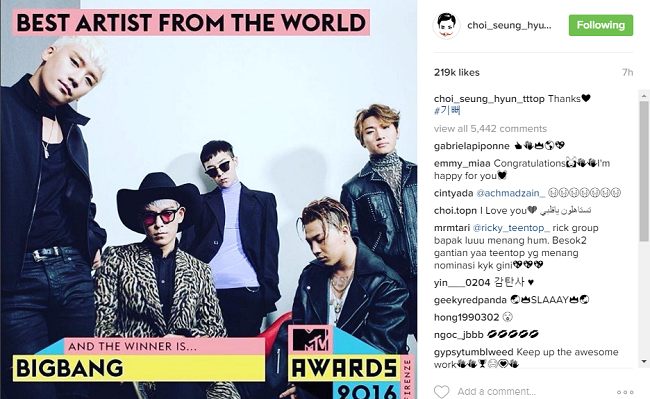 The K-Pop world is, of course, ruled by the record-breaking music artist/group, and the territory is not just limited to Korea. The boys are not only special in their music, but also when is comes to fashion; since they are trend setters. It is not a secret that G-Dragon is one of the artists that the entire world looks up to when it comes to exclusive fashion style and many fashion designers look forward to work with him. Apart from G-Dragon, T.O.P and Tae-yang also have been noticed as icons in this subject.

The members have also shown off their fabulosity individually, as soloists, and also as actors along the way. Their latest release, ‘M.A.D.E’ series – both music albums and global concerts – were successful and created history for modern Korean music.

Check out their music video of ‘BANG BANG BANG‘ from their ‘M.A.D.E‘ series below:

Check out their music video of ‘La La La‘ from their debut album ‘BIGBANG Vol.1‘ below:

BIGBANG is one of those groups who really loves their fans and knows how to appreciate that love. Share with us your wishes for BIGBANG’s future and your thoughts about the group’s success in the comments below!

Scroll for more
Tap
SEVENTEEN Releases More Individual Posters For Upcoming Concert!
SISTAR Are Back With ‘I Like That’ & One Of The Best Choreographies Of All Time!
Scroll
Loading Comments...