Make’ em whistle like a missile Black Pink! American pop culture news outlet Entertainment Weekly featured the rookie girl group in their article discussing singles from new and upcoming artists. Praising Blacks Pink’s ‘Whistle’ Entertainment Weekly described the single as an ‘unabashedly playful ride from the start’. Also included in the list are newcomers Tkay Maidza, Leikeli47, Cappa, and more. Each artist brings their own flavor and style to the ever-growing music scene.

Since their August debut, Black Pink has made quite a splash with their edgy in-your-face image and being the fastest group to win first place on ‘Inkigayo‘ since debuting. Hopefully someday they will reach international stardom! Let’s hope for their continued success! 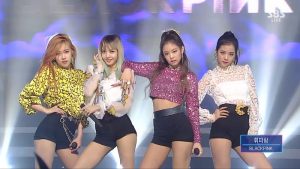 What do you think about Black Pink being covered in a very popular American magazine? Leave your comments below.

Scroll for more
Tap
Infinite Had ‘The Eye’ On The Prize With Their First Win!
OFFROAD Is Paving Ways to Manila!
Scroll
Loading Comments...