BTS On Stage Prologue Sends A.R.M.Ys Off Their Chairs!

BTS On Stage Prologue Sends A.R.M.Ys Off Their Chairs!

If the extended version of “I Need U” wasn’t enough to send your emotions for a loop, Big Hit Entertainment was sure to send them further into overdrive with their eleven minute and thirty one second mini movie released on the V app. Mission accomplished, Big Hit! BTS On Stage : Prologue, with the beautiful song “Butterfly,” has this writer clutching at her heart overwhelmed by fangirl feels!

First of all – can someone get V (Kim Taehyung) an acting job please? The member known best for going from silly to sexy in zero point two seconds had my mouth agape at the first scene of this film where tears fell down his face, wiping the remnants of the fight we’d seen in the “I Need U” extended version from his hands and face.

While the small film seemed to start and end with the story line V had in the controversial extended version video, every member’s line seemed to be touched. Jin seeming to look out and over all the members with his video camera, Jungkook blowing out Suga’s lighter, Rapmoster‘s gas station job along with the notorious ‘lollipop,’ J-Hope covering Jimin with a blanket to keep him warm – so many things!

My only warning to you is just as the credits roll of this mini film, it’s not over! Watch all the way to the end for another heart-wrenching moment that Big Hit seemed to give instant relief (if one could really call it that!) to with the promise of Part two in October, and November on stage! I’m not ready, but I’m ready, but I’m not. I’m sure you understand what I mean!

While we don’t want to ruin the magic for you with every beautiful, wonderful, heart tingling detail, I urge you A.R.M.Y’s if you haven’t seen it – go watch it! You will not be disappointed! Although we can’t be held responsible for wiping you up off the floor if the feels you’re hit with are a bit overwhelming. I can’t lie, they sure are for me! The link is below but you need the app to view it!

And if it’s not enough, while the buzz is still flying through the air of the interwebs of how good this little movie is – the boys have updated their Twitter with pictures they’ve personally taken from the set – and goodness are they beautiful, just like them! 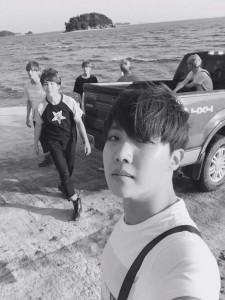 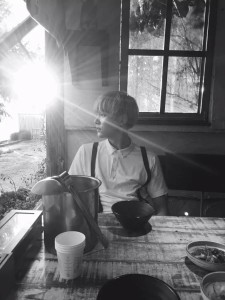 All in all, the mini film encompasses the beauty that is the friendship Bangtan Boys share with one another. Their effortless acting really needed little prompting, as the comraderie they’re known for is easily shown through everything they do.

If you don’t have the V app, what are you waiting for?! Go download it and see all of the other utterly adorable videos our boys as well as other K-Pop idols put up often!

Have you seen the video? Are you slayed just like we are!? Let us know in the comments and stay tuned with us here at Officially KMusic for more updates on the groups you love!