BTS ‘Love Yourself: Her’ details and comeback schedule

BTS ‘Love Yourself: Her’ details and comeback schedule

Okay, take a deep breath everyone, we’ve got lots of BTS news to get through!

First, Big Hit Entertainment has dropped the track listing for ‘Love Yourself: Her‘.  The new album will contain a total of nine (9) tracks.

The nine tracks are:

Check out the track listing for BTS ‘Love Yourself: Her’

Now for some album details for ‘Love Yourself: Her’.

The album package will include a photo book, CD, mini-book, photo cards, sticker pack and a poster.  The design of the album package is simple yet clean, sophisticated and artistic with a flower, which we assume is the much talked about smeraldo.

Take a look at the album details below:

If that’s not enough, we have one more piece of BTS news.  They have confirmed that they will be having a comeback show exclusively on Mnet.

Just a couple of days after the album is released, the group will be holding the ‘BTS COMEBACK SHOW‘ on September 21st at 830pm KST on Mnet.  Fans all over the world will be able to see BTS perform their new songs live.

They’ll also share insights about how they came together as a group, the production of their albums and much more.

The show will be broadcast on Mnet in Korea, Mnet Japan in Japan, JOOX and iflix in South-Eastern Asia, VIKI in the USA and Mnet‘s own YouTube channel.

Take a look at the ‘BTS COMEBACK SHOW’ poster 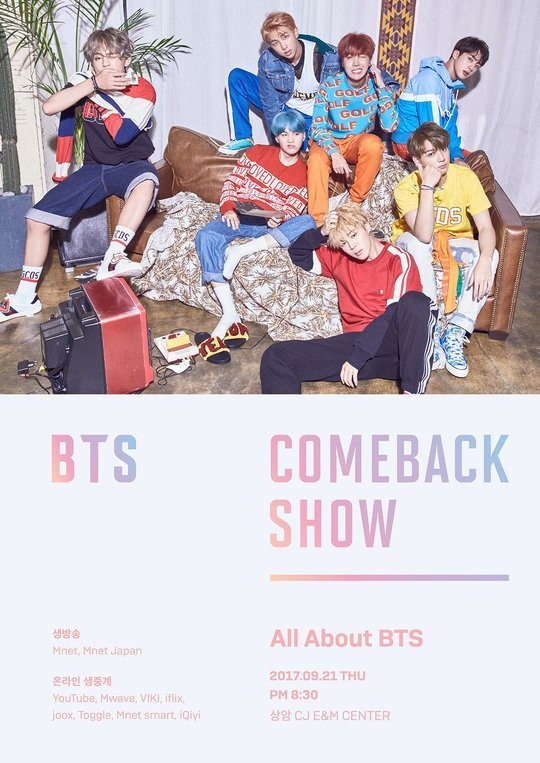 In the meantime, don’t forget BTS‘ new album ‘Love Yourself: Her’ is scheduled for release on September 18.