Former I.O.I member Chung Ha has announced she will be making a comeback!

On October 10th, the singer’s agency MNH Entertainment confirmed that Chung Ha is preparing for a comeback sometime in November! The company confirmed the news in a statement saying that “Chung Ha is currently in the midst of preparations for a comeback”, but also noted that no release date has been confirmed as of yet. 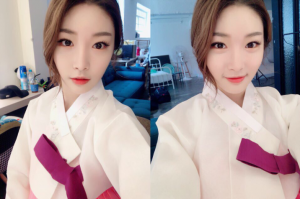 This comeback follows the singer’s solo debut with mini album ‘Hands On Me‘ in June of this year. Chung Ha‘s debut title track ‘Why Don’t You Know‘ was a hit with listeners, storming to the top spot on a number of real-time music charts immediately after release. Her chart success along with nominations for the #1 song on music shows sees speculation that Chung Ha will be nominated for the solo rookie of the year awards at the end-of-year awards shows. If her November comeback makes a similar impact on the charts, Chung Ha‘s chances of taking out the award will increase even further!

Whilst she is currently preparing to make her first comeback as a solo artist, Chung Ha is also currently working as a DJ on the EBS radio program ‘Listen‘.

Are you excited for Chung Ha‘s solo comeback?