HYWY Entertainment released a statement concerning the group’s future on October 20, citing disagreements between the members and the company.

“Hello, this is HYWY Entertainment.

First of all, we would like to thank and apologise to all those who have waited a long time for DayDay‘s debut. After long discussions DayDay, who were preparing to make their debut under HYWY Entertainment, have decided not to remain together due to differences in opinion between members and the company. We apologise for not being able to bring good news to the many fans who have waited for DayDay‘s debut.

Although they will no longer be a part of the team called DayDay, we hope you will continue to support and encourage the five members as they embark upon their new paths. We also apologise for any inconvenience this announcement may have caused.

DayDay‘s official SNS accounts will be deleted next Monday (23rd), and the group’s official fan cafe will be closed on October 23.

Thank you for your understanding. Thank you.” 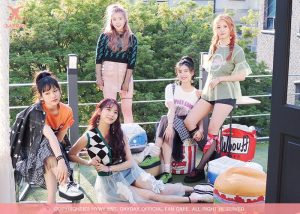 DayDay released a string of teaser images for their debut earlier this year. The group was to be made up of members Soohyun who formerly appeared on ‘Produce 101‘ and was in project group I.B.I, Minju who was a former member of The Ark and competed in ‘K-POP Star 6‘, Eunbin, Sul Ah, and Debby.

Whilst DayDay will no longer be debuting together, Officially KMusic wishes all five members the best for their future activities!

Scroll for more
Tap
ATTENTION! Voting has begun for 2017 MAMA nominees! Have your favourites made the cut?
‘Smile’ because Cosmic Girls are getting their own reality show!
Scroll
Loading Comments...