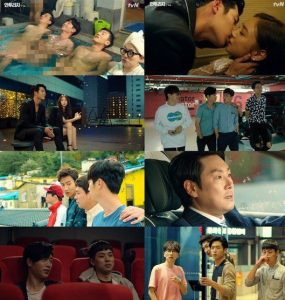 Entourage fans, the wait is over! The Korean adaptation of the highly popular HBO show recently aired on tvN, November 4th. The premise of the story centers on the life of up and coming South Korean actor Cha Young Bin (Seo Kang Joon), and his 3 childhood friends, Lee Ho Jin (Park Jung Min), Cha Joon (Lee Kwang Soo), and Geobuk or Turtle (Lee Dong Hwi). The show is full of comedy, friendship, and some inappropriate shenanigans mixed in. The first 2 episodes gives viewers a glimpse at the main characters’ distinct personalities and relationships between each other.

The show unveils the nitty gritty of the entertainment world and attempts to show some of the realities of celebrity life. Moreover, it seems that regardless if in Hollywood or Seoul, one thing hasn’t changed. And that is sex sells. There’s plenty of raunchy conversations, steamy make out sessions, and way too many naked men congregating in one room. All within the first episode alone. However, it gives the dynamics of the plot a similar feel to it’s original American counterpart. In terms of story line, the initial development focuses on the relationship between best friends, Ho Jin and Young Bin. Young Bin who is quickly becoming a rising star throughout Korea, is met with obstacles such as a potential movie release flop, crappy audition choices, and an unrequited love. He is faced with unexpected challenges in not only his acting career, but with his lifelong friendship with Ho Jin. On the other hand, Ho Jin struggles to find his place in the world. This can be seen constantly throughout the first two episodes, especially with his career as a manager continuously threatened by the entertainment agency’s CEO Kim Eun Gap (Jo Jin Woong) breathing down his back, a girlfriend who is unsatisfied with his career choice, and Young Bin’s apathy towards acting gigs. The friendship clash between the 2 main characters gives some depth to the show, especially when I first expected the show to be all about living the high life and getting girls. The first few episodes also shows that Young Bin is not just a pretty face, but is loyal and capable of sacrificing his wants for friendship. From a glance, the show seems like a typical “bro” comedy but it’s looking to definitely be more than that.

I initially had a few reservations about the show since I felt it would try to compare itself too much to the original. However, I’m optimistic about the progression of the drama and I think it will definitely evolve into a drama of it’s own. Additionally, I first started the show because of some of the names who would be starring. However, I think the synergy and character development between the actors is off to a good start, and this will keep me interested throughout the following episodes. I did appreciate how the show addresses the very real struggles that are possibly faced in the entertainment world in Korea. Despite the struggles, the comedic relief keeps the show fresh and light hearted. I am also loving the never ending cameos like MAMAMOO and I.O.I throughout the show. Overall, I would give the drama a 9/10 since this is still the first few episodes of the show. What are your thoughts on the show? Let us know in the comments below.

Be sure to check out ‘Entourage’ on tvN every Friday and Saturday at 11pm (KST)!

Follow Oficially KMusic for all the latest news in Korean entertainment!