Monday evening, downtown Philadelphia’s Voltage Lounge didn’t see hours of long lines around the block waiting for a show. With a DJ and live drummer to keep a super diverse crowd entertained, there was no problem letting concert goers settle around the small stage or up on the balcony level. The evening was unseasonably warm, so the dock doors were open and gated off which allowed attendees to spill out onto the sidewalk, but even with the extra space, the show floor was packed nearly to capacity by the time the first act of the night started. 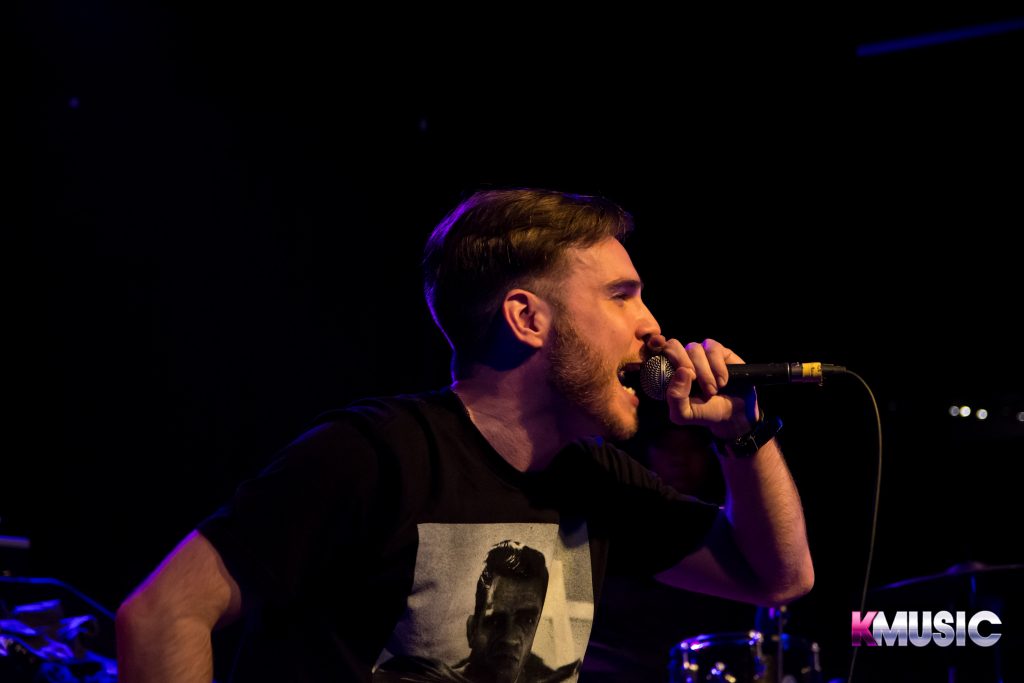 Philadelphia local Voss opened the show just after 8 pm with the DJ and drummer to perform three of his tracks and a couple of bars of freestyle acapella. Voss, who’s been rapping since he was in junior high, was new to most of the people in the audience, and he certainly impressed with a solid flow and clever lyrics—especially in his few bars of freestyle. His earnest delivery and energetic stage presence is reminiscent of indie hip hop artists like Astronautalis or K.Flay. 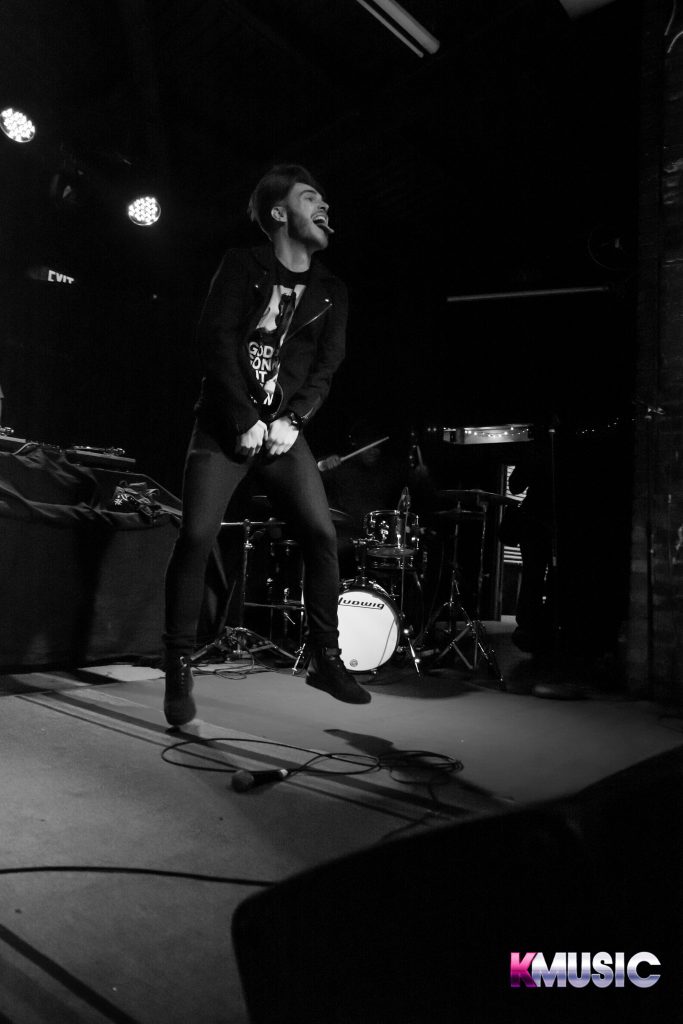 While his first two tunes got the crowd bouncing, he had to pause for those oooooooo’s you usually hear in rap battles after an unexpected ‘All Lives Matter’ diss and the line “Ever since America dun pulled the Trump card”  in his freestyle. He closed with the chill —and once again clever— ‘Respect My Mind,’ adding R&B singer Minton on jazzy hook duty to the delight of the audience. While Voss is not a Korean-American MC, he definitely hyped up the crowd for his half hour on stage, and during the break between his set and the next, a number of people remarked they’d be checking out more about him later. 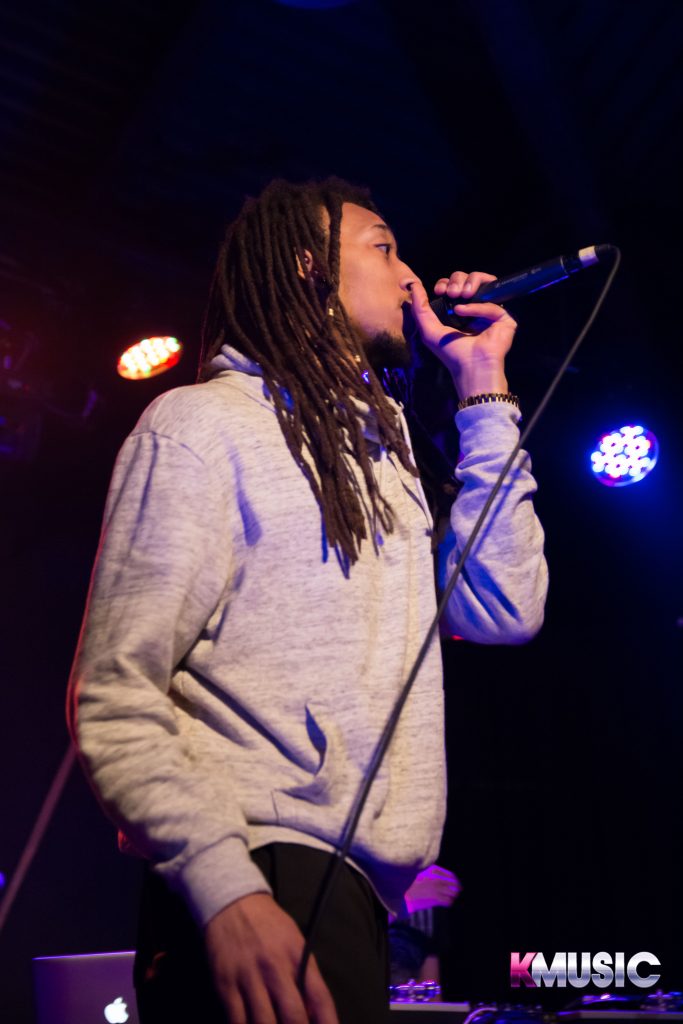 Voss left the stage to allow a short set from the DJ, accompanied by the standard (and entertaining) assembly of a bunch of folks on stage hyping the crowd with quick freestyling and dance. Another Philly native, Danny Chung, took the opportunity to toss out a few fire verses of his own—but it did get a bit difficult to tell who was on stage doing what since everyone was just doing their thing when and however they wanted. Still, the crowd dug it, and around 8:45, Year of the Ox seamlessly took the stage to start their set with the self-titled ‘YotO.’ 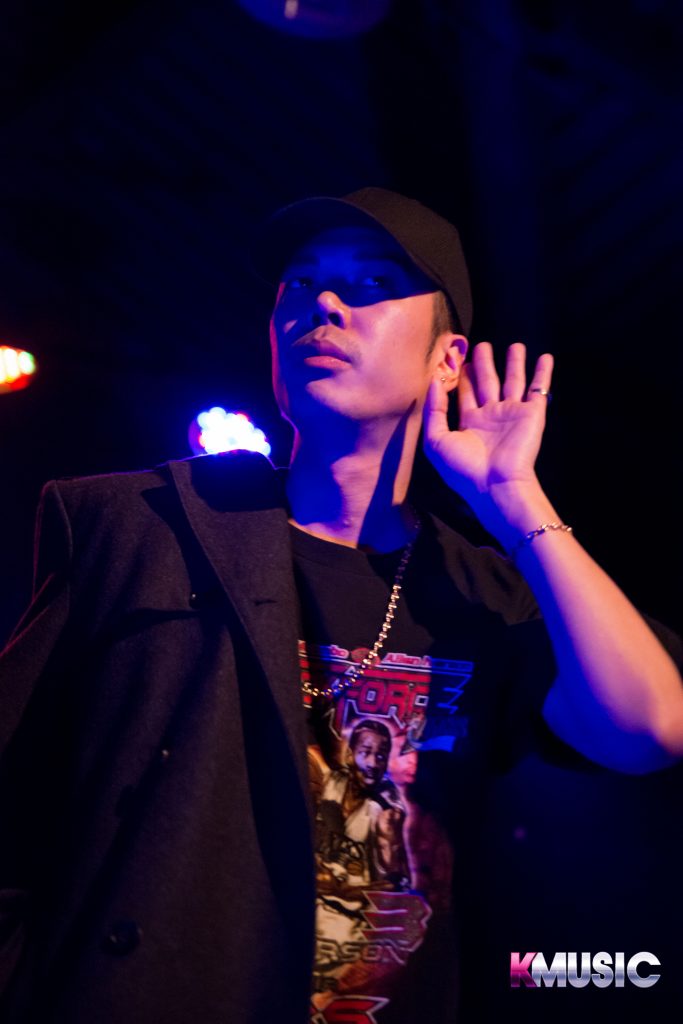 For anyone who’s never seen Year of the Ox perform, the first thing you notice is the absolutely absurd chemistry of a duo who’ve been rapping together for over ten years. They don’t just trade verses; they’re down to trading syllables. Lyricks (aka Rick Lee), half of the Virginia-based pair, is known for a monster flow and impeccable diction that gave him his big break. While he was on tour in 2013 as the bus driver for the Wu-Tang Clan, he was given a 5 minute set at the start of a show—but in the middle, Masta Killa himself came out and said, “This is one of the nicest Asian[s].. I’ve ever heard in my life. I’m gonna give him 30 minutes!” ‘Nice,’ to be quite honest, is an understatement. Lyricks spits solid, steady rhymes of which every word can be heard like he’s writing them in the air, and that talent was perfectly showcased in their opening number, ‘Stampede,’ which was followed ‘Stretch’—necessary, they said, because “We been in the van—seven dudes—not even a tour bus kinda thing, but a like a church retreat bus—we gotta stretch it out.” 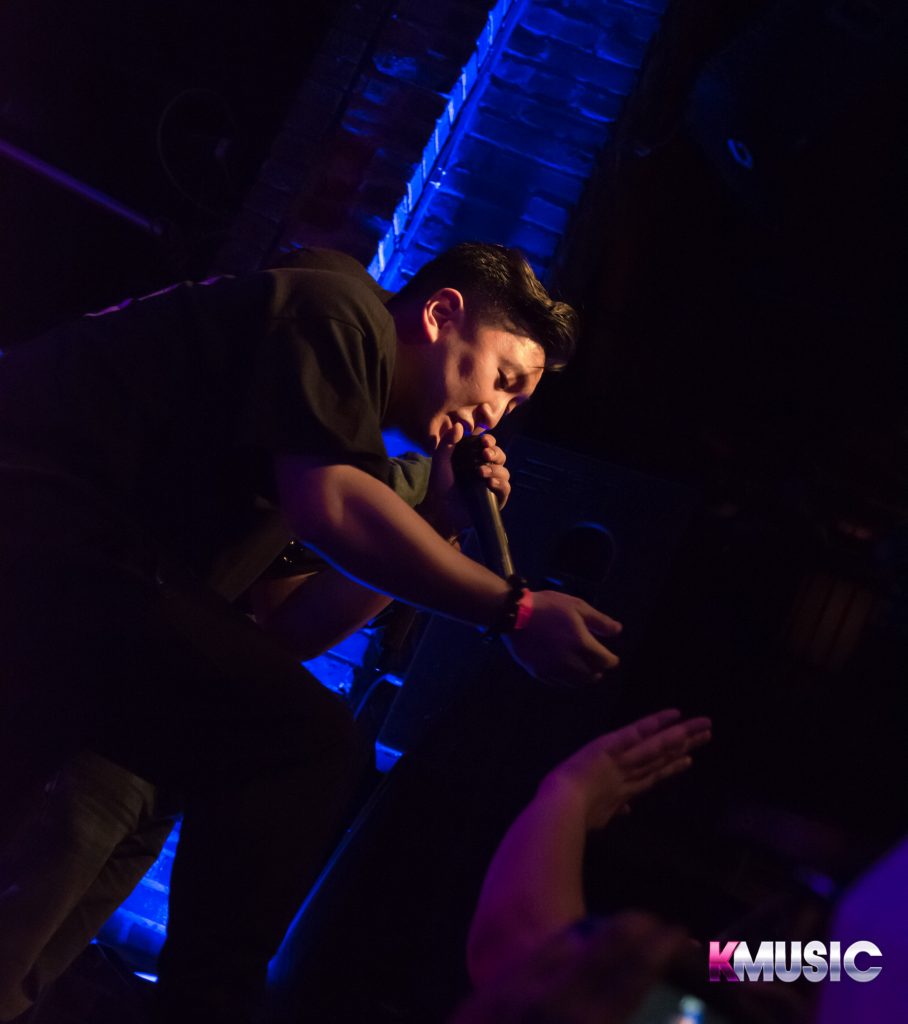 Given how tall Voss looks to be, that was a fair choice.

Next, JL (aka John Lee), the other half of the pair, had a question for the crowd – “Who f*cks with ‘Sesame Seed Oil’?” The song is primarily a discussion and a critique of the Korean American experience and the difficulties of it. Lyricks’ first verse talks about cosmetic surgery, kimchi jjigae at 5am, Instagram, and boom boxes, and his second name drops Korean rappers, American rappers, and slams both American and Korean politics, showing how Year of the Ox works the philosophy and reflection of old-school hip-hop into their own version of American culture. While there were plenty of Korean-Americans in the crowd who put up hands and laughter, JL was answered by shouts from quite a few other as well. Using sesame seed oil appears to be universal, and the song universally liked. They followed this with ‘Strictly for the Lees’ and another opportunity for Lyricks to spread that butter-like flow over the crowd. 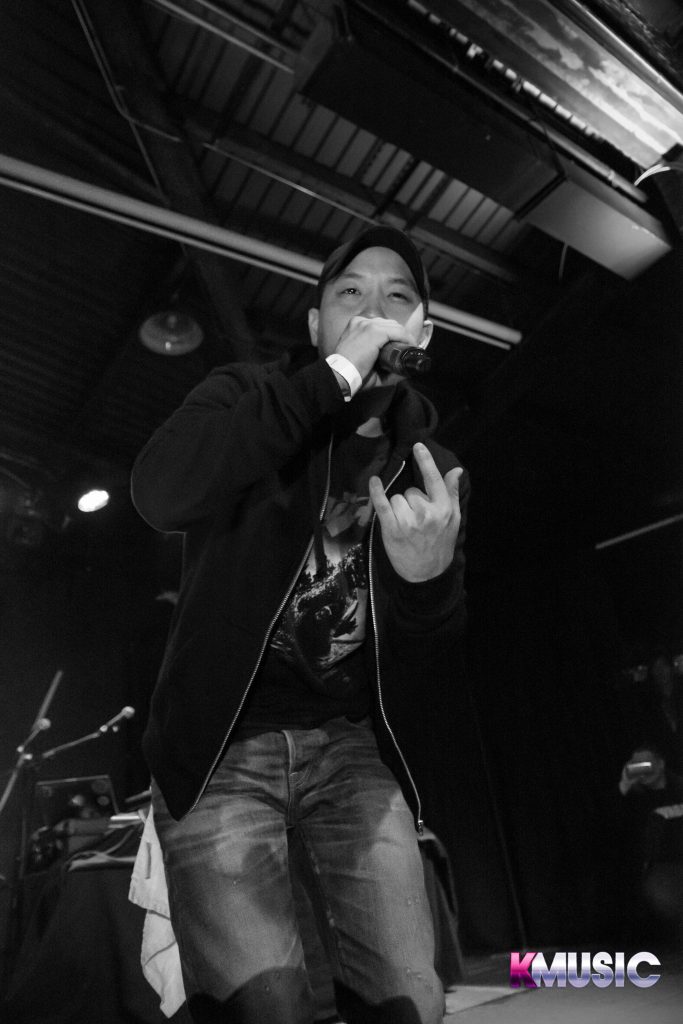 Their final track, however, was their moment to go full on East Coast ham. JL is often the more understated of the pair with a calm flow that makes it seem sometimes like he’s just a super chill hype man, but ‘Seven Rings’ reminds you that this kid can spit fire—extremely clever, extremely riddled with clever syncopations fire. Combined with Lyrick’s merciless diction and a vicious bassline, the crowd was completely lit when DJ Zo went into full swing and YotO took a much-deserved break.

But as a side note, if you’re into recording sets with your phone or camera—or you’re worried about your hair—you might want to keep all that covered while Year of the Ox is on stage. Lyricks and JL are 100% about baptizing their fans. Often and thoroughly—many water bottles were tossed in the name of getting turnt. 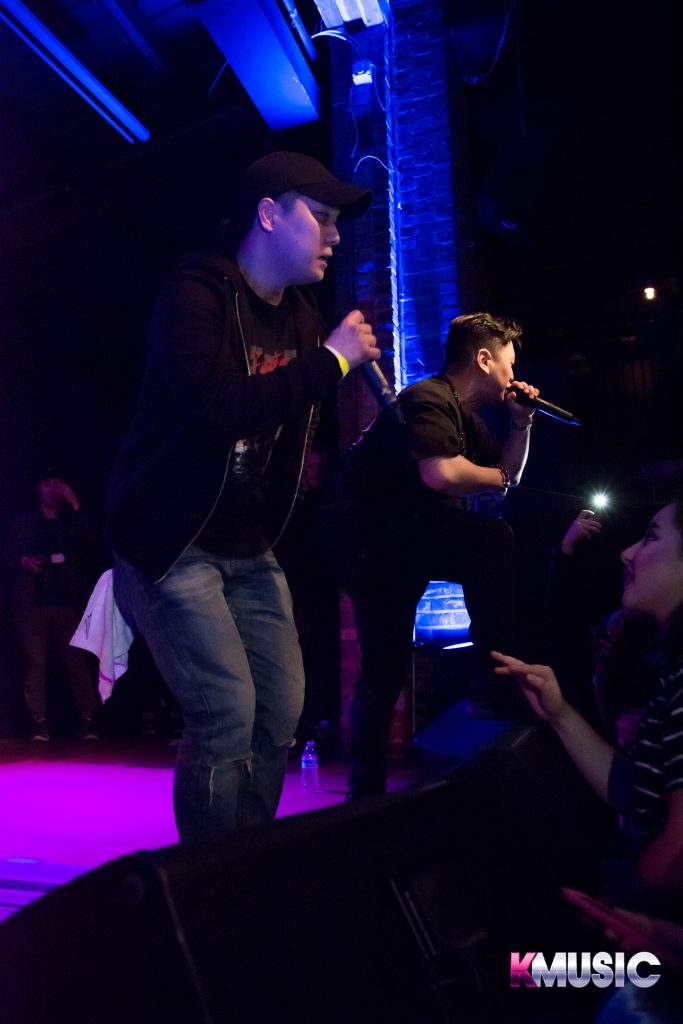 Meanwhile, if anyone wasn’t paying attention to the goings on during that break, writers in the middle of notes for their article for instance—me, they still had no trouble knowing when the main attraction commenced. At exactly 9:22 pm, a roar went up from the crowd that was nearly enough to mask a massive bass drop. But the crowd knew what they were hearing because they were already chanting the lyrics to ‘Korean Jesus’ with all hands in the air while Dumbfoundead prowled the stage for his first song. 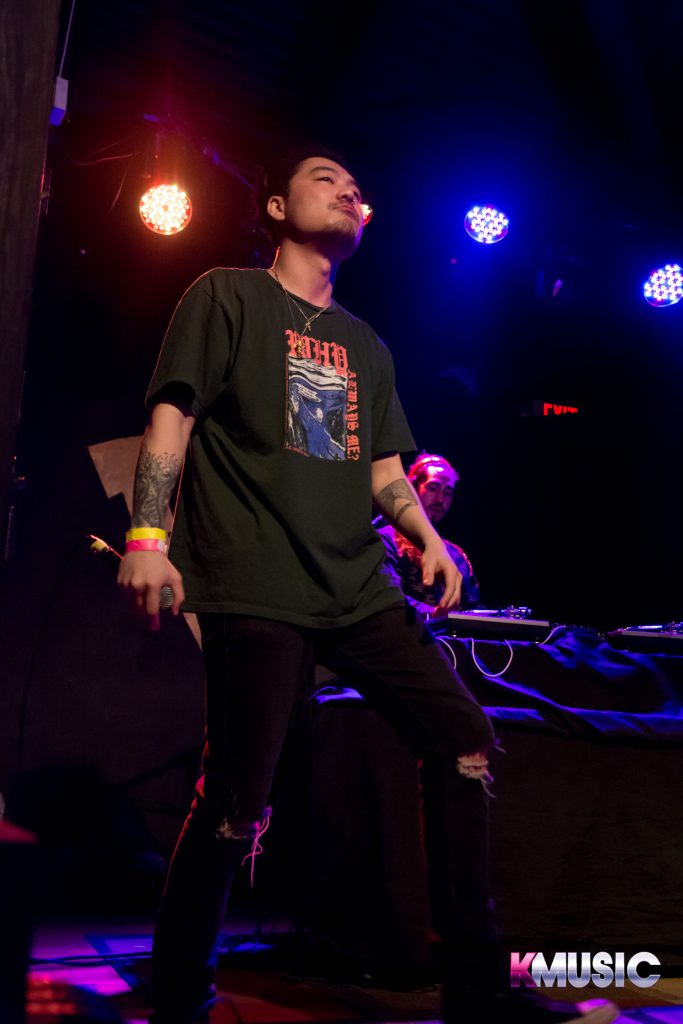 And so began what can be described as a masterful show blending elements of straight hype and laid-back chill throughout. After a moment where Dumb lauded the enthusiastic crowd for being “supportive as f*ck,” he moved onto ‘24KTown,’ followed a brief interlude where he chatted amicably with the audience—getting to know them since they so obviously already knew him. During the next break, he found it especially important to take care of his younger fans—“Two Capri Suns on the rocks for the under 18s!” —and to pass on some advice for a music major in the crowd, telling her “Ooooh – yeah I know a little something about that industry and it’s f*cked up,” earning laughter from the crowd and good-natured chuckles laden with a heavy dollop of sarcasm from DFD that are a feature of his lyrics. 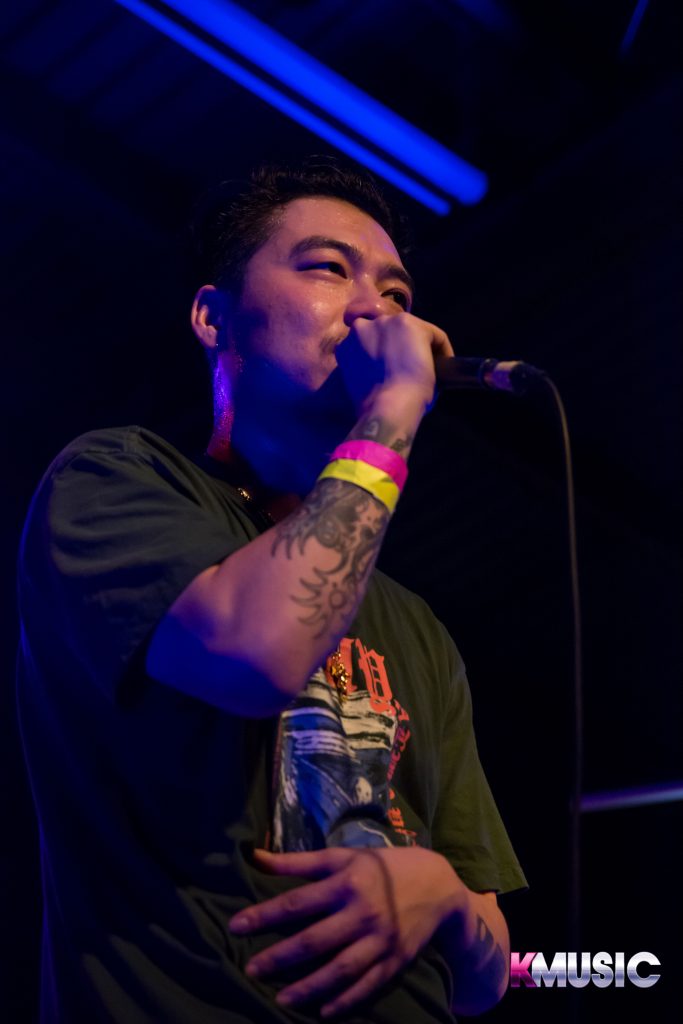 Next, he brought Year of the Ox back out for a bumping performance of his latest single, ‘We Might Die,’ released last November 10th and including the timely line about “building that wall.” During another entertaining chat session—a mark of Dumbfoundead’s tremendous charisma on the stage, he brought it back whilst talking to a young man in the audience majoring in mechanical engineering. “Yeah! Build bridges, not walls!” Dumb crowed, to which DJ Zo (aka Zomanno, whose internet presence does not do a lick of justice to his serious skill) immediately cued up YG & Nipsey Hussle’s viral hit ‘F*ck Donald Trump.’ “I gotta do this every morning,” Dumb told everyone while they shouted the chorus, “wake up, have some coffee, and play that sh*t.” DJ Zo then once again displayed his skill by blending smoothly into the opening bass—so much bass—of ‘Cell Phone’. Once again, the crowd showed their support by rapping the words along with DFD’s solid, if not flashy, flow, and from there, Dumbfoundead moved to ‘Mijangwon 미장원’ and ‘Genghis Khan,’ in quick succession, followed by another break—which didn’t seem to be quite planned. 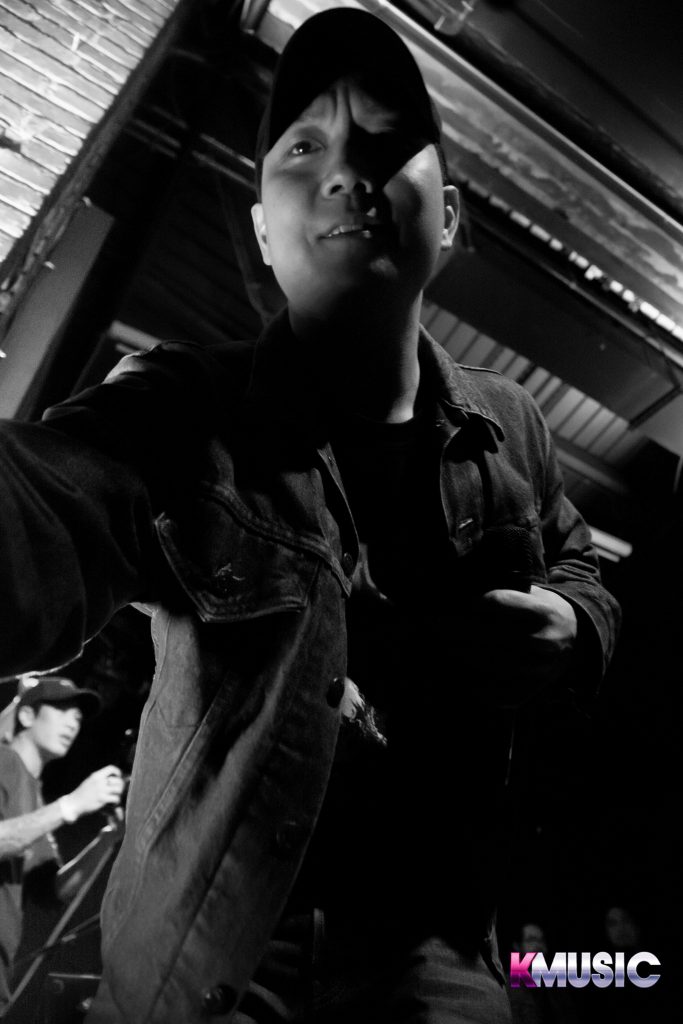 It wasn’t clear what happened, but Dumb coolly played it off. “Y’all ain’t live enough,” he said to a medium-loud crowd. Fans immediately fixed that by letting out a roar, and he laughed. “Actually, when I fuck up, I like to blame y’all.” To laughter he launched into ‘Are We There Yet,’ then some freestyling over DJ Zo’s mix of different coastal hip hop beat tracks reminiscent of the likes of Biggie, 2Pac, and Dr. Dre. It is in freestyle that DFD really shines, having had what is a legendary rap battle career, and the DJ cut the tracks to let Dumb drop some acapella bars which had the crowd going with incredible articulation and plenty of changing up the flow. 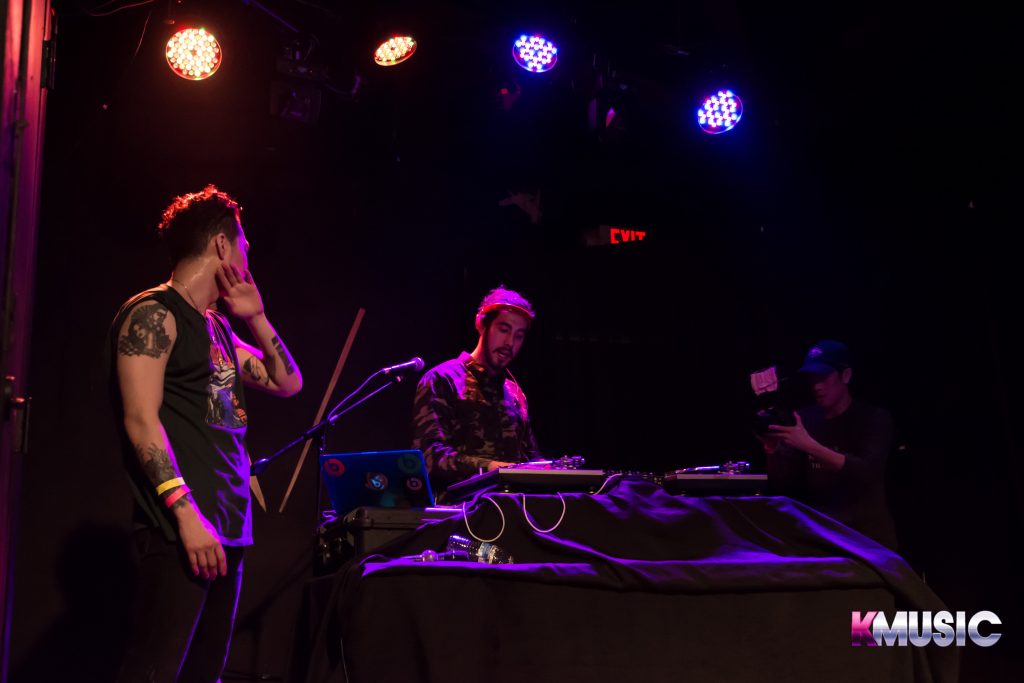 The impromptu freestyle was followed by what was arguably the evening’s theme— ‘Hold Me Down,’ a laid-back track with a nice groove that talks about the people who’ll be there for you, leveling in that hype-and-chill space that Dumbfoundead so effortlessly commands and showing how true Lyricks’ earlier pronouncement, that “Philly … may be one of the best shows we’ve had so far.” Next came ‘Safe’, to which the entire crowd practically howled the opening lines of, shifting the atmosphere from chill to turnt with a good deal of jumping, and random cameos from YotO bringing refreshments out on stage for the hardworking rapper. And the whole crew was on the stage for the finale of the thoroughly anticipated track ‘Harambe.’ One word for that —at the sake of sounding repetitious—it was lit, fam. 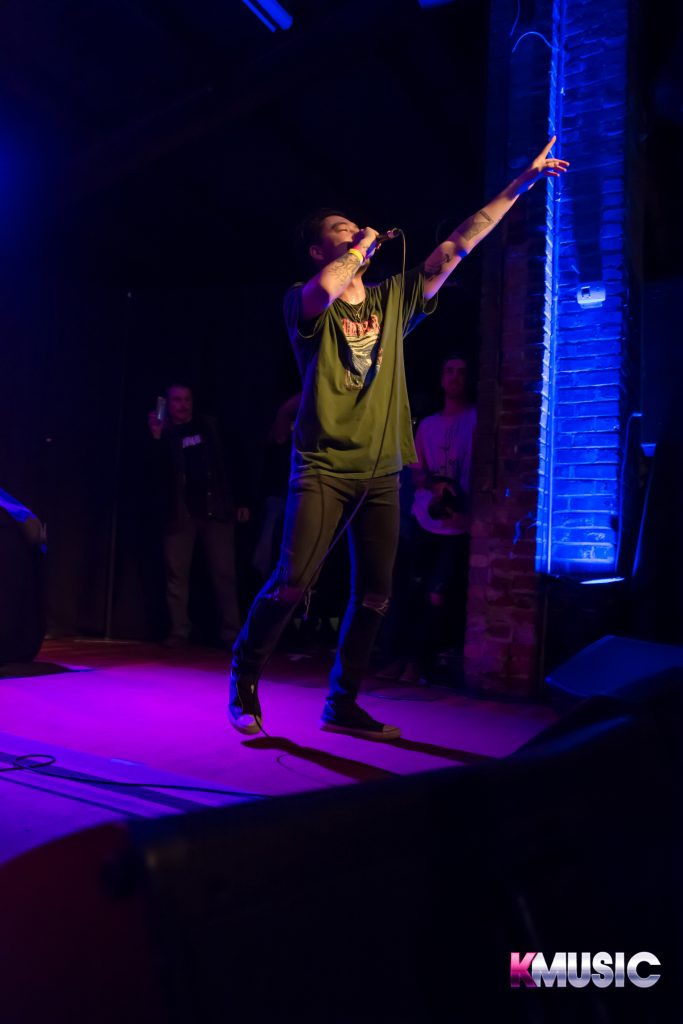 In all honesty, there was really only one thing to complain about, which was the constant running about of their tour camera man. While documenting your show—and your fun! —is definitely something that any concert goer can appreciate, having him all over the stage just about all the time was distracting to an otherwise awesome set of performances. 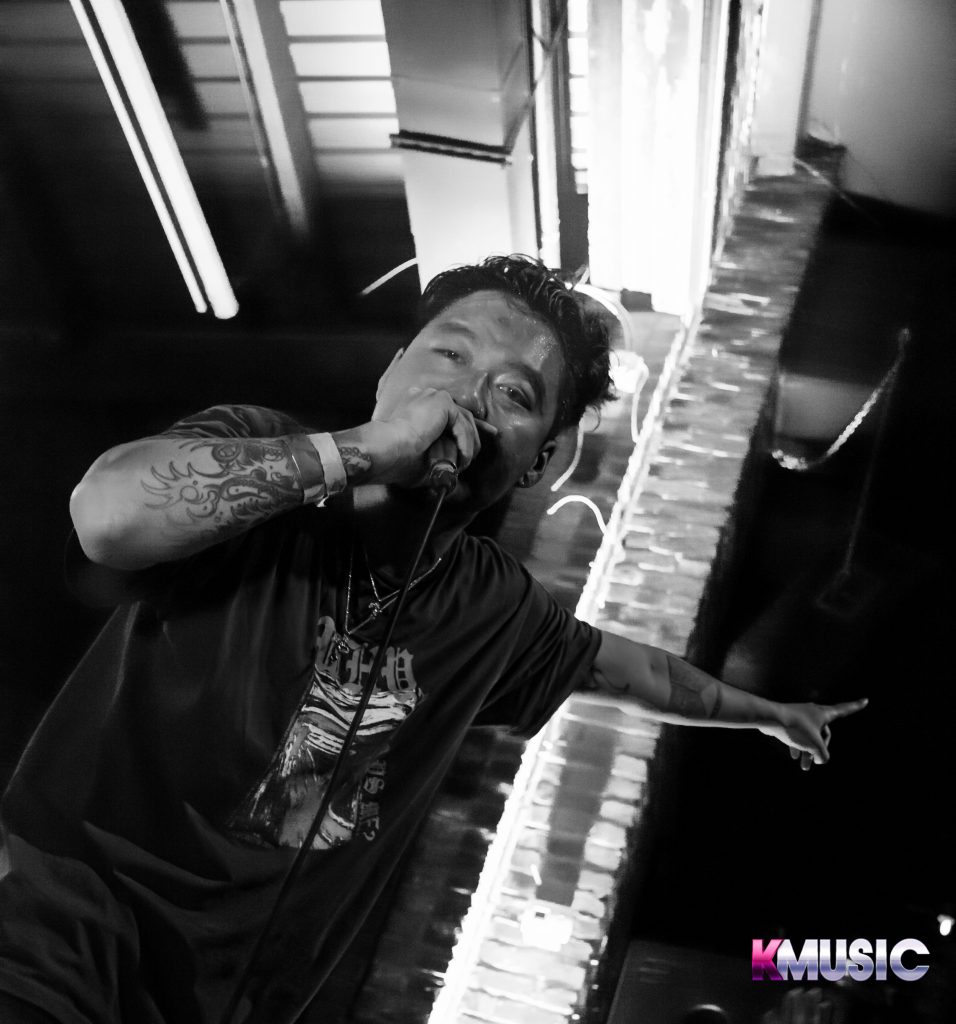 Many, many thanks to Transparent Agency for allowing us to come out and enjoy, and to Dumbfoundead, Year of the Ox, and crew for putting on a completely fantastic show.

For more photos from the show, check out our Photo Album!

Stay tuned to KMusic for our upcoming exclusive coverage from their Chicago stop and many more Korean music events from around the world!