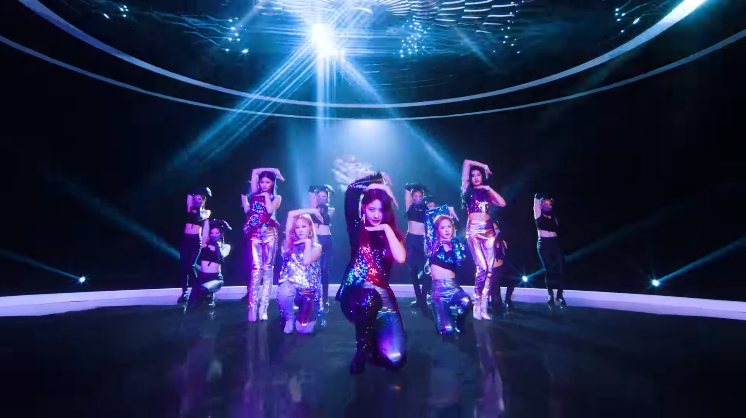 On September 21st, EVERGLOW released the MV for their title track, ‘LA DI DA’. This comes off the group’s simultaneous release of their 2nd mini album, ‘77.82X-78.29’. Check out the MV down below!

The lyrics give a slap to the haters with them having no time for them; nor can they even hear their voices. Although the producers that created this song are largely the same as those who produced the girl group’s previous title tracks, this is genre change for the girl group. However it’s equally punchy, with a strong electro-pop beat and vocally led chorus with a catchy hook of the title.

Watching the MV, it shows the girls roaming and ruling the city streets in a variety of girl crush outfits. There are the black leather outfits and red hip hop inspired attires which we saw in the earlier teaser images. The city is barren with the members freely moving locations between the middle of a city square, to an underground station and the rooftop of a tall building, overlooking the city with determination. Furthermore, all through the video we see snippets of the choreography to the song. The feel of the dance has a similar vibe to the track being confident, fast and showing off the group’s assertive nature. The dance break before the bridge and routine afterwards also feature the members in a set of sparkly colourful dresses, leaning into the shining retro synth instrumental break during those parts.

‘77.82X-78.29’ features four tracks and is already breaking the group’s personal records with the highest 1st day album sales sitting at over 18,000 copies. It is an incredible 388% increase from their last record being their 1st mini album, ‘Reminiscence’ which sold 4,745 copies on its release day.

How do you feel about ‘LA DI DA’ and their new album? Let us know in the comments below!

Scroll for more
Tap
TREASURE say ‘I Love You’ in cheerful and energetic comeback MV!
THE BOYZ prove they are ‘The Stealer’ of hearts in tempting comeback MV!
Scroll