Popdust has chosen EXO -K as the next K-pop act that will probably go huge in 2013.

The group has beat out another rookies, such as Juniel, B.A.P, Lunafly and EXID.

EXO-K’s popularity is measured by the amount of album they have sold. Even though, the group didn’t promoted as much as B.A.P did, their debut album, ‘MAMA‘, was one of the highest selling K-pop album in 2012. They have managed to surprass such big artists as JYJ‘s Junsu, KARA, CNBLUE and… PSY.

Popdust wrote: ‘It’s not hard to see why EXO fever has spread so quickly. EXO-K is like a hybrid of SM’s best boy bands, carefully constructed to be the ultimate super group. They’ve got the good looks of TVXQ, the slick moves of SHINee, and the tight hooks of Super Junior. Hell, they’re so great that there’s even a Chinese version of them.’ 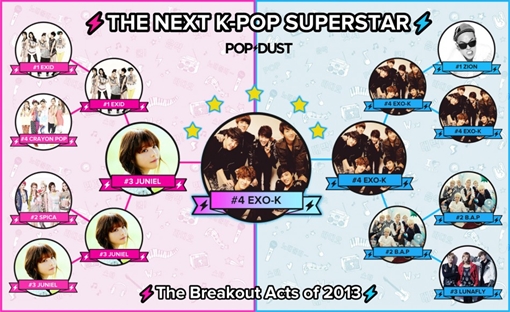