Officially Kmusic would like to wish BIGBANG a very happy 11th anniversary! 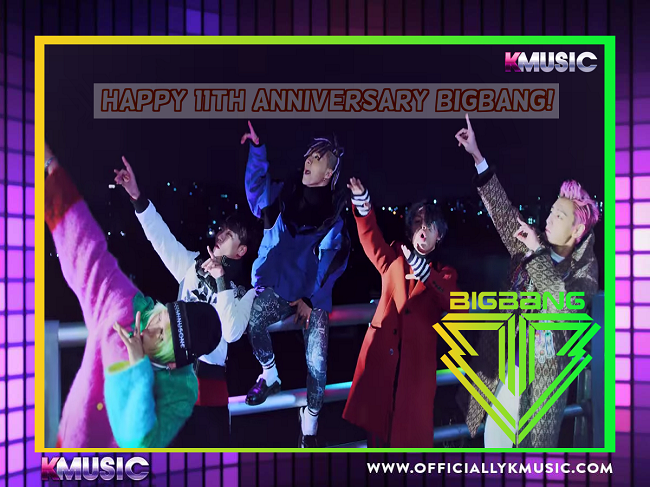 Things to know about G-Dragon:

He’s been performing since he was 9 years old.

He’s the main rapper and leader of the group.

His stage name comes from his birth name ‘Ji Yong’ Ji sounds like the English ‘G’ and ‘Yong” means Dragon in English.

He and T.O.P. grew up together.

From age 8-12 he was an SM Trainee and from 13 until he debuted with BIGBANG he was an YG trainee.

He debuted as a solo artist in 2009 with Heartbreaker.

Things to know about T.O.P.:

He’s currently on hiatus and is due to renew his military enlistment between now and sometime in 2018.

He’s a actor; having been in several movies and dramas.

He was first rejected by YG for being “too fat to be an idol.

He’s said he would date Taeyang if he was a girl.

He said if he was a girl he would date Daesung.

He can speak English; but he prefers Korean.

He’s Roman Catholic and has many tattoos to protest to his faith all over his body; his most famous one is on his side of the cross.

Both his Japanese and Korea stage names mean “sun.”

He and G-DRAGON are the only two who are not actors.

Things to know about Daesung:

He’s fluent in Japanese and has two Japanese solo albums.

He’s the most popular member in Japan and is very popular over all in Japan.

He’s an actor working mostly on Japanese movies and dramas.

Things to know about Seungri:

He and T.O.P. share the same name; therefore they had to take stage names so fans could tell them apart.

G-Dragon likes to call him “Little Seunghyun” because he is the younger of the two and the maknae of the group.

He choreographs a lot of the groups’ dances himself.

He has his own dance academy.

Written by, collage by and featured image by: Admin Merry