Jeon Jiyoon fans have a lot to look forward to in the next few months!

Jeon Jiyoon, also known by her stage name Jenyer, has announced her plans to release new music in Fall!

The singer announced that she has plans to release a single in September, followed by another new track in October. The announcement came as Jiyoon was on a road show to promote ‘MU:CON SEOUL 2017‘. MU:CON is a convention focusing on interaction and communication between the Asian and global music industries. The convention features a music showcase, representing a variety of genres, as well as collaborations between Korean and Western artists and producers. The 2016 edition of MU:CON saw a collaboration between SISTAR and world-famous electronica musician Georgio Moroder, which resulted in the group’s song ‘One More Day‘. It remains to be seen how exactly Jeon Jiyoon will be involved in the festival. 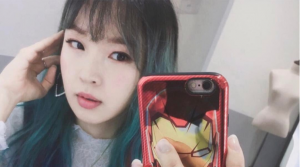 Jeon Jiyoon left Cube Entertainment upon the end of her contract with the company in June 2016. She made her solo debut in November 2016 under the stage name Jenyer. Her debut solo album was titled ‘Day and Night‘, and featured title track ‘I Do‘ which she did not promote on music shows. What musical direction do you think Jeon Jiyoon will take with her upcoming releases?

Follow Officially Kmusic to stay up to date with the latest news in Korean music!

Scroll for more
Tap
EXO drop more teaser images in the lead-up to ‘THE WAR: The Power of Music’ release
DAY6 members Young K and Wonpil are next up for ‘Every DAY6 September’ teasers
Scroll
Loading Comments...