Jewelry‘s Yewon featured as a guest on the recent broadcast of QTV‘s ‘Shin Dong Yup and Ranking Women, along with Park Eun Ji, Lee Bon, Solbi, Jung Ga Eun, and Jung Kyung Mi. She surprised viewers by revealing she was once asked out by a male celebrity ten years older than her!

Shin Dong Yup asked, “Have you ever been asked out by an older man?”, Yewon answered, “Yes. He was a guy ten years older than me.” 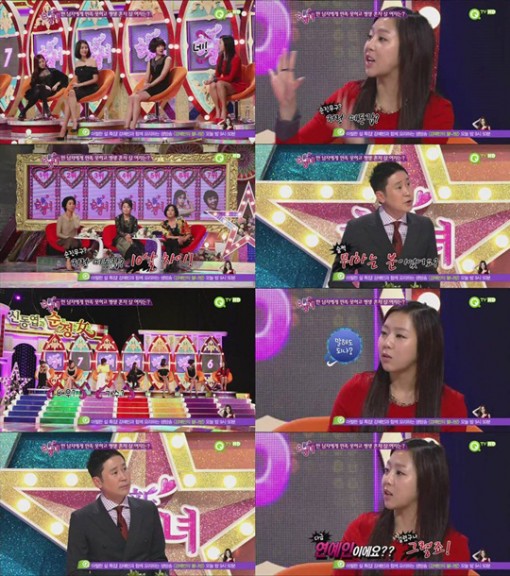 Yewon grew flustered when the guests began to press for more information, asking,“Singer? Actor?” Avoiding a direct answer she just revealed that the myerious man is a celebrity born in ’79. “Let’s change the subject now,”  Shin Dong Yup said upon seeing Yewon so flustered. She was relieved until he then added, ”Let’s leave it to netizens to figure out the identity of the man,” bursting everyone into laughs.