JinWoon and Park SeYoung to be Music Bank’s Next MCs

JinWoon and Park SeYoung to be Music Bank’s Next MCs

2AM‘s JinWoon and actress Park SeYoung from “School 2013” are to be the next MC’s for Music Bank.

The local news agencies confirmed that there will be new MC’s after Lee JangWoo and After School’s Uee stepped down. 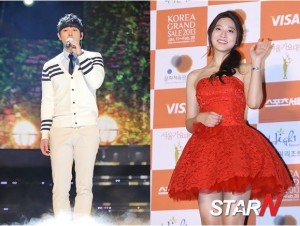 This pair is one of the unique innovations that “Music Bank” introduced. There were many rookie actors who gained attention from being MCs such as: Lee Jang Woo, Song Joong Ki, Seo Hyo Rim, Song Hye Kyo, Lee Na Young and So Yi Hyun.

One of the program’s producer said, “The team-up of 2AM’s Jinwoon and 2013′s hottest newcomer Park Se Young is found to be the best face to present K-Pop to the world, as ‘Music Bank’ is broadcast live in 88 countries around the world”

Their first episode will be aired on April 12.