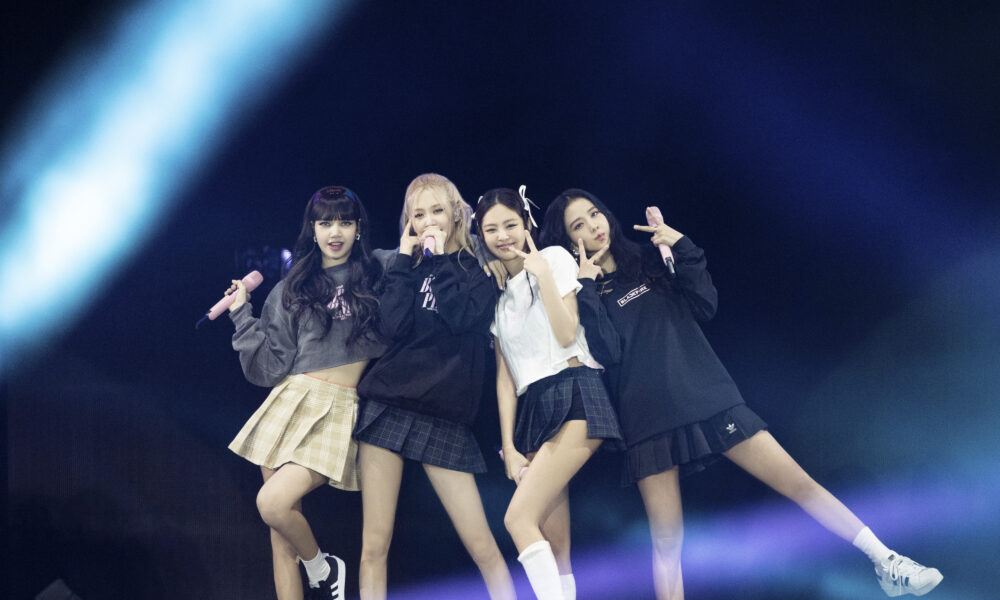 Finishing up the U.S. leg of their second world tour, Born Pink, BLACKPINK performed an explosive two nights at the Banc of California Stadium in Los Angeles, CA. With the group’s name already providing the perfect theme for fans, known as Blinks, concert goers showed up and showed out in flashy black and pink outfits, armed with lightsticks, signs, and banners to support them at their first U.S. stadium show.

Following a VCR showing the members prancing around and posing in what appeared to be an amazon, the lights slowly turned back on as four recognizable silhouettes could be seen on stage. The deafening screams from Blinks all around only grew louder as the beginning notes to “How You Like That” could be heard, and the group, dressed in tan outfits, strutted to the front to begin the show. Keeping up the momentum of such a strong song as the opening, BLACKPINK quickly launched into “Pretty Savage,” one of their debut songs “Whistle,” and “Don’t Know What to Do.” Although entirely unnecessary as the crowd chanted and cheered each name already, the members introduced themselves briefly before launching into the next song. With minimal stage props and stage effects, the show was centered around the members themselves, relying on them to fill up the vast stage with their presence.

Switching outfits after another brief VCR showing the girls in greyscale walking through barren land, BLACKPINK next appeared on stage with their iconic Hanbok-inspired outfits on to perform “Kill This Love.” The girl group blew through “Crazy Over You,” “Playing With Fire,”“Tally,” and “Pink Venom,” before a dance break by the YGX dancers and an instrumental portion by the group’s live band would welcome the next set. As each of their solo endeavors has been wildly successful, it was unsurprising that the group also prepared solo stages for the show. To start things off, Jisoo performed a cover of “Liar,” as the only member without a solo release thus far. Surprising everyone, original singer Camila Cabello also made an appearance, turning it from a cover into a collaboration. Jennie performed an unreleased song paired with a sultry partner dance with one of their dancers, Rosé performed “Hard to Love” and “On the Ground,” and Lisa finished things out with “LALISA” and “Money,” the latter of which had an incredible pole-dancing introduction from Lalisa herself.

Coming back together on stage, BLACKPINK launched right into their latest title track, “Shut Down.” Wearing chic outfits to match each of their model-like figures, the next song up was “DDU-DU-DDU-DU,” which was paired with wild cheers as the audience danced along. Seemingly ending the night with “Forever Young,” the audience cheers only grew louder, as Blinks beckoned for BLACKPINK to return to the stage for their encore. To the fans’ delight, it was only a quick few minutes before the girls returned to the stage wearing their merchandise comfortably, performing “Yeah Yeah Yeah” and “Stay,” before “As If It’s Your Last” officially ended the night.

Although each song was met with enthusiasm from their Blinks, the highlight performance was inarguably “Typa Girl.” The song describes the BLACKPINK members as one of a kind, and their live stage truly emphasized the message, with smirks gracing their faces, body rolls galore, and stable vocals and dance. Despite previous stages not being perfect, with occasional out-of-sync dancing and some difficulties with the sound, the four girls sang and danced their hardest when it came to this performance. Their energy quickly picked up with “Typa Girl,” and was the best song to describe the overall concert atmosphere, as it best captured the essence of a BLACKPINK show — a performance put on by a group of young women who are having fun together with their fans rather than focusing on technicalities, confident in themselves, their sensuality, and each other.

The last time the group had been in Los Angeles was 2019 during their Blackpink In Your Area tour, so needless to say, fans were incredibly eager to see their favorite girls. Matching that energy, BLACKPINK also had a great time on stage, interacting with their Blinks, asking them to put their phones down and just enjoy the moment, and joking around with one another naturally. Creating memories for both the group and fans, the night could only be described as ending too soon.