A few weeks ago at the first ever KCON in Irvine California, Kmusic caught up with rising AK-POP star, Chad Future for a quick interview.

Q: You are going to be performing today. How are you feeling right now and what is going through your mind?

A: I’m really excited about it. It’s really kind of an honor to do this here because this is like one month after I debuted and I’m already performing at one of the largest K-POP conventions in the entire world. So, to me, this is just an amazing moment and I’m really grateful for it. I want to impress everyone that watches and I want to make everyone a believer.

Q: What exactly is the message you are trying to convey with your performance today.

A: What I want to do today is, I want to make sure this performance is so amazing so people are like, ‘Dang! He just took that K-POP style, mixed it up with that American style, blended it all together and then shot it out as Chad Future.’ That’s what I want to see today.

Q: Your song and MV for ‘Hello’ is gaining quite a bit of attention online. How long was the process and what was the most difficult part?

A: The process to make ‘Hello’ started in January. What the style was, what the music was going to sound like, how we were going to use the language; that’s how this whole project kind of came to life was from having those kinds of conversations first. And that’s why it took so long to make the first single, the first debut because we had to kind of test the waters as we put out the first single of ‘Bad Boy’ remix. Just kind of getting in the waters and testing the waters a bit. When ‘Hello’ was finally done, it was just like a weight off of my shoulders because it was just like, I’ve been working on that first single for so long to get the awareness, to start using the language, to get people talking and asking questions. ‘Can an American artist do this?’, ‘Is this okay?’ 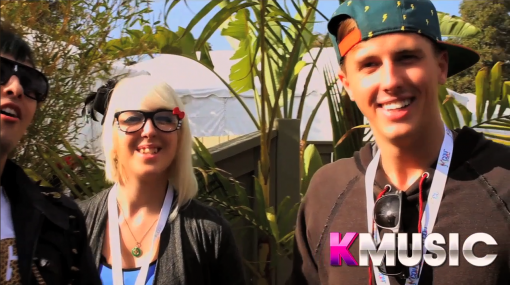 Q: So, you also got to work with Tom Coyne and Sammy Naja. What was your experience with working with them?

A: So, I just got to say on record that both those guys are incredible, so nice, so kind, so supportive and I think it all comes down to just showing you have the passion for something. Showing you have passion and showing them that you’re not going to waste their time; this is worth their time. That’s what I think it’s all about when working with big artists as you’re just starting out. I’ve been working with people who are HUGE in the K-POP music world and the only way to do that is to show my feelings I have and my passion. I’m not just like ‘Oh, I kind of want to make a song.’ It’s like, ‘Yo, we’re gonna do this. It’s gonna be the biggest thing in the world. We’re going to make a huge video for it. We’re going to make the biggest song.”, and everyone is just like, ‘Yeah! We wanna do this to.” So that’s what’s been so fun about it was getting people who I look up to and respect and making great things with them and that’s how this project is going to succeed.

Q: What’s your main motivation that helps you move forward with K-POP?

A: I think every time I watch a big, dope K-POP video. I’m like, ‘Yo man, I gotta beat that’, because I get so inspired and influenced by these big K-POP music videos. So, for me, when I see that, its like, ‘ Man, I wanna do that exact same thing. I wanna make a vision like that. I wanna entertain people like that. I wanna make that kind of connection.’

Q: Are there any stars you’d like to collaborate with in the future? If so, who?

Chad: I just want to say that KMUSIC is amazing and thank you so much for all of the support, you guys are awesome. I can’t wait to give you guys more great music, more great videos, impress you and show you something special, and be someone you guys can interact with and be a part of my team and be a part of this journey to bring American K-POP to the top. I can garantee right now that you are going to be seeing more amazing things coming from K-POP, the American scene, the Korean scene and world wide. This is an amazing amazing time for K-POP right now so you guys are lucky to be a fan. Thank you again for everything and lets do this big, lets have fun with it.

For more Chad Future, check out his Music Video for  ‘Unstoppable’ below and tell us what you think!