KNK depart from YNB Entertainment and Youjin leaves the group

KNK depart from YNB Entertainment and Youjin leaves the group

An industry insider had said that the group recently terminated their contracts due to internal issues with the agency.

A representative stated, “YNB has been experiencing difficulties due to management problems, so the contracts with KNK have been terminated although there is time left until they expire.”

The statement continued, “Kim Youjin, who is not in good health, has decided to leave the group after discussion. The other members have strong will to promote, so they have agreed to continue on with the team.”

A source from YNB Entertainment confirmed the reports and added that KNK is now searching for a new agency.

Kim Youjin has written a letter of apology to his fans and members and uploaded the handwritten letter to KNK‘s official fan club.

“Hello. This is KNK’s Kim Youjin.”

“First of all, I’d like to apologize to Tinkerbells [KNK fans] who have been worrying and waiting for me. For the past two years since debuting as KNK’s main vocal, I’ve been very happy.”

“It was a long-cherished dream since I was young, and I wanted to do better than anyone else. As those thoughts became burdensome, the days of being disappointed in myself increased, leading to psychological difficulties. I ultimately came to the difficult decision of leaving the group.”

“I took time to concentrate on treatment, but it has become very difficult to stand and perform on stage. I would like to express my sincere apologies to Tinkerbells and my members for making this decision.”

“I wrote in my letter for our first anniversary that I was very happy to be with good people, creating good memories. From before my debut to my activities with KNK, I was always happy and thankful to you guys for making happy memories with me and being with me. I made many promises with Tinkerbells, and I’m very sorry to you and my members that I can’t keep them all.”

“I won’t forget your support.”

“Once again, I’d like to apologize to Tinkerbells and KNK members Seungjun, Inseong, Jihun, and Heejun who gave me a lot of love and support all this time. I will never forget and forever treasure the love you gave me for two years. I’m sorry to Tinkerbells who believed in me and waited for me until the end.”

“Please give a lot of warm support and love to my KNK members who understood my decision. I will also support and pray for them.”

“Thank you very much for everything until now. I’m sorry, and thank you.” 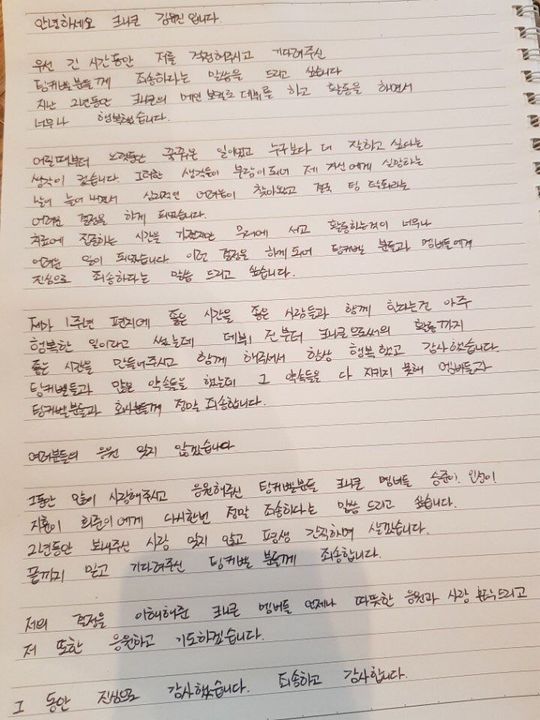 What do you think of the news of KNK leaving YNB Entertainment?  More importantly, what about Youjin leaving the group?  Let us know your thoughts in the comments below.